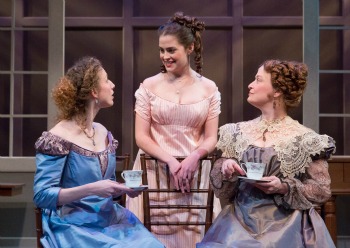 When People’s Light announced that they would be doing Sense and Sensibility this season, I was thrilled because their 2014 production of Pride and Prejudice is one of my favorite shows that I have seen on their stage. The production of Sense and Sensibility, under the direction of Joseph Hanreddy, is equally as stunning. It makes the words of Jane Austen come alive onstage, and will make the audience fall in love with the story. Everything about the production at People’s Light works in telling the story: the performances, the set, the music and the dancing. Sense and Sensibility will transport audiences to Regency England where they will watch the story of the Dashwood Sisters unfold.

Jane Austen’s Sense and Sensibility was published in 1811 and was her first full length novel. She originally titled the story “Elinor and Marianne.” The story follows the lives of the Dashwood Sisters, Marianne and Elinor. Their lives are turned upside down with the death of their father when they find that he left all his property to their half-brother John. Elinor and Marianne take up residence in a cottage on a distant relative’s property. It is here that Marianne and Elinor, pursue life and experience romance and heartbreak.  The production at People’s Light was adapted for the stage by Joseph Hanreddy and J.R. Sullivan. The show is full of all the romance one would expect of Sense and Sensibility, but it is also infused with humor and remarkable staging that makes exceptional use of the space at People’s Light.

What People’s Light does well with Sense and Sensibility is make this beloved Austen novel come to life, and they do this through every aspect 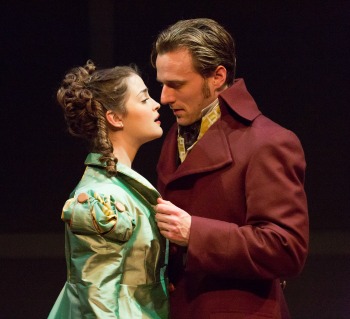 of the show. This cast is outstanding, as they keep the audience engaged with the story while the plot unfolds. Cassandra Bissell plays Elinor Dashwood, the sister who is sensible and reticent, and who always feels a sense of responsibility to her family.  Bissell is strong in this role while still being reserved in her speech, audiences can feel her yearning through her facial expressions and interactions. She perfectly characterizes Elinor throughout the entire show.  Claire Inie-Richards plays Marianne Dashwood, the romantic and expressive sister. Marianne is not afraid to speak her mind, and she often does so despite warnings from her sister. Inie-Richards shines in this role as she is spirited and immediately likable. Marianne is the character who has to evolve the most throughout the story as she is naïve in the beginning and grows to become a more sensible and sympathetic individual. Inie-Richards shows the transitions of this character with grace. Neil Brookshire plays Edward Ferrars, the older brother of Fanny, the sister-in-law of the Dashwood sisters, who develops a close relationship with Elinor. Brookshire is enchanting, and his scenes with Bissell are strong and some of the best in the show. Playing John Willoughby is Sam Ashdown. Ashdown brings out the charm of Willoughby in the beginning of the story, and eventually he emerges as deceitful. The scenes with Ashdown and Inie-Richards are powerful, as audiences will feel the despair of Marianne when she learns the truth about Willoughby. Grant Goodman portrays the dignified Colonel Brandon, who is hopelessly in love with Marianne. Goodman is charming as he brings out this characters honor and kindness, and he gives a sublime performance. Watching Sense and Sensibility at People’s Light reminded me of what a timeless story this is with themes such as love, loss, social status and family relationships. This production bursts with wit and heart, and the entire cast does a wonderful job bringing the characters from the classic novel Sense and Sensibility to life.

The artistic team also needs mentioning for this production of Sense and Sensibility. Linda Buchanan designed the set. Dennis Parichy is the Lighting Designer and Keven Heard is the Sound Designer. Marla Jurglanis designed the beautiful costumes. Samantha Reading serves as the choreographer. In addition, Paul James Prendergast is the composer for the production.

Sense and Sensibility runs at People’s Light through March 20, 2016. For more information and tickets visit their website at peopleslight.org or call their box office at 610-644-3500.

Final Thought: Sense and Sensibility at People’s Light is a charming production with a stellar cast. It is a show that will remind audiences of the beauty of Jane Austen’s writing and will make them fall in love with the story and characters all over again.

I absolutely and full-heartedly agree with this review. Sense and Sensability will now bring me back to People's Light again and again. The cast, set, and direction were amazing. I love how the story itself was so prominently displayed while the staging and set were just enough to accentuate the story without distracting the audience from the characters. It is truly remarkable and effective use of props!

I look forward to attending many more productions at People's Light.