People’s Light Presents an Exceptional and Genuine STELLA AND LOU 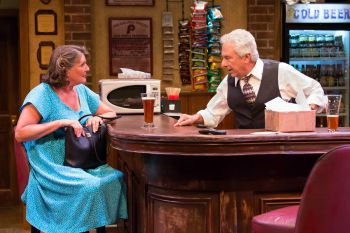 Stella and Lou at People’s Light is a play that at its core is a story about the relationships of people in their later part of life. What I loved about this particular play is that the characters are relatable whether you are in your 20s or 70s. These characters are fervent and portrayed with such honesty that it is transcending.  The production of Stella and Lou at People’s Light is one that is genuine, and the portrayal of these characters will emotionally move audiences.

Stella and Lou written by Bruce Graham takes place at Lou’s Bar, which is a fictional bar in South Philly. The visual details in the creation of this bar are amazing. Set Designer, James F. Pyne, Jr., created a set that resembles a bar in South Philly complete with Phillies memorabilia and a Rocky poster. This set draws the audience in while setting the mood and tone for the play. The play is about Lou, who owns the neighborhood bar, and he resigns himself to a solitary life. Stella is a nurse who frequents Lou’s bar and they develop a friendship. However, Stella is at a point in her life where she is deciding whether her twilight years will be spent in a 55+ community in Florida near her child and grandchild or with Lou, a man who she thinks is caring, kind and that she see could see herself staying in Philadelphia for. Stella and Lou is a moving portrait of two people dealing with loneliness and loss and the rekindling of hope.

Under the direction of Pete Pryor, Stella and Lou is a regional premiere that concludes People’s Light’s 40th anniversary season. Tom Teti 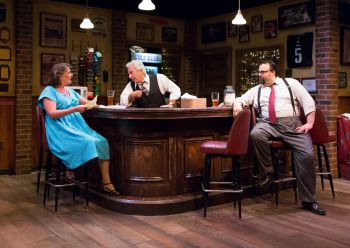 inhabits the role of Lou, and even though Lou seems like a man who is set in his ways, Teti brings out a part of this character that is not only fearful of deviating from his ways, but also shows compassion and concern for the people he encounters. Marcia Saunders plays Stella, and she strikes an artful balance between assertiveness and being cautious.  Saunders captures the vulnerability of Stella. Teti and Saunders have a certain chemistry and believably well-established relation with one another in this production. In particular, there is one scene in which things become heated between Lou and Stella, the emotion, anger and deep seeded regret and longing that is exchanged during this scene is intense and captured brilliantly by these two talented actors. Scott Greer portrays Donnie, a bar regular who is getting married and is terrified of his impending marriage. Greer provides an energetic performance as Donnie, and expertly portrays the anxiety that Donnie associates with paying for his upcoming nuptials and the emotional roller coaster he is experiencing in committing to a lifelong relationship with his fiancée.

Stella and Lou runs at People’s Light through August 23, 2015. For more information and tickets visit their website at peopleslight.org or call their box office at 610-644-3500.

Final Thought: Stella and Lou at People’s Light is a genuine and emotionally moving show about the lonely hearts of two people who both know love and loss. This is an engaging and moving play, and the appeal of this particular production is in the power of the performances of these three incredible actors.