People’s Light Presents a Moving I AND YOU 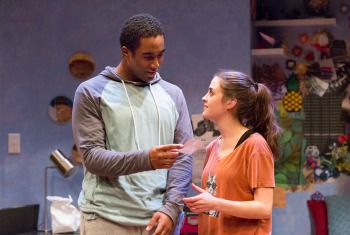 Walt Whitman is considered by many people as a revolutionary nineteenth century poet who celebrated nature, love and friendships in his poetry. He is also thought of as one of America’s most important poets. Whitman’s work becomes a focal point for the characters Caroline and Anthony in the play, I and You, which is currently onstage at People’s Light. Caroline leads an isolated life and she finds herself influenced by her exposure to Whitman’s words. I and You at People’s Light is authentic and it is a beautiful piece of theatre.

I and You is a play written by Lauren Gunderson. The show tells the story of Caroline, a high school student, who is homebound due to an illness and she is on the waiting list for a liver transplant. One afternoon one of Caroline’s classmates, Anthony, stops by her house and begins quoting lines from Walt Whitman’s Leaves of Grass. Anthony is there to ask for Caroline’s help with a cooperative project they are working on for their American Literature class. What ensues during the next ninety minutes is a show that is wonderfully performed about two teenagers learning not only about Whitman, but also about life and one another.

Personally, I loved the way this play dissects portions of Whitman’s Leaves of Grass, as well as brings out the humanity of the characters. 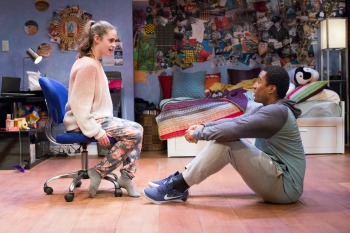 Director, Samantha Reading, successfully interweaves Whitman’s poetry while telling the stories of these two teenagers. I and You will touch the hearts of many audience members. The writing of the play by Gunderson and the performances by Claire Inie-Richards and Ricardy Charles Fabre are incredible. Inie-Richards plays Caroline, a teenager who seems bitter toward everyone around her because she has been sickly for most of her life. However, there are things that bring Caroline joy such as listening music, taking photos and her cat. Inie-Richards is outstanding as Caroline particularly in the way she expresses emotions such as anger for being sequestered in her room most days and how her friends do not to visit her. Fabre plays Anthony, a person who loves basketball and who has a positive attitude about life. In addition, he has a passion for Whitman’s poetry because he relates to the subjects Whitman writes about. Fabre is charming as Anthony and his charisma holds the attention of the audience. Also, Fabre and Inie-Richards have great chemistry onstage and breathe life into these interesting and memorable characters.

In addition to the wonderful cast and director, I need to mention members of the artistic team. The detailed set designed by Dylan Jamison and Will Scribner depicts Caroline’s bedroom complete with records, lots of photos, collages and glitter. Maria Shaplin is the Lighting Designer and Christopher Colucci is the Sound Designer and responsible for the original music played throughout the show. In addition, Bridget Brennan is the Costume Designer.

I and You runs at People’s Light through April 23, 2017. For more information and tickets visit their website at peopleslight.org or call their box office at 610-644-3500.

Final Thought: I and You at People’s Light is a beautiful and affecting piece of theatre. It intertwines the poetry of Walt Whitman and the lives of two teenagers. The performances by Claire Inie-Richards and Ricardy Charles Fabre are outstanding, and people will leave the theatre touched by the surprise ending.