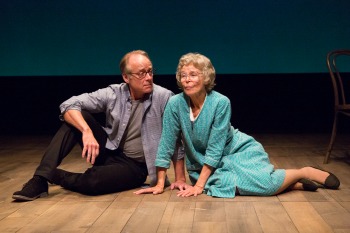 Walking into People’s Light this past week to see the production of How to Write a New Book for the Bible, I knew it was going to be a show that was about, “a man who must care for his funny, maddening, and dying mother.” However, this play is so much more than that. It is a show that is witty and humorous, and it a show that will affect audiences on a deep emotional level. How to Write a New Book for the Bible is one of the best pieces of theatre I have seen this season. It is honest and gripping, and tells a story that most people will be able to relate to on a personal level.

On opening night, Samatha Bellomo gave opening night remarks in which she related that the theme of this show is about family, and how we care for each other. How to Write a New Book for the Bible is a semi-autobiographical play by Bill Cain. Cain, not only is a writer, but he is also a Jesuit priest. He skillfully wrote a play that is a powerful look at the details of our lives and the choices we make, and why they matter. How to Write a New Book for the Bible is about a man, Bill, who works as a writer, and who is also taking care of his dying mother. The play deals with the story of Bill and his familial relations. In a previous interview the playwright, Bill Cain, expressed that this is the most autobiographical thing he has written. He stated, “The play focuses on three people, my father, my mother and my brother. These are exquisite human beings, and I wanted to ritualize in some way the wonder of their lives as a way of celebrating them.” This play touches on a topic most people can relate to, taking care of an aging parent, and there are poignant moments that touch an emotional nerve, but this story is told with passion and humor. How to Write a New Book for the Bible is a powerful play that examines what it means to be family and how we care for one another.

Under the direction of Abigail Adams, How to Write a New Book for the Bible is heartfelt and humorous. Greg Wood plays Bill, the protagonist 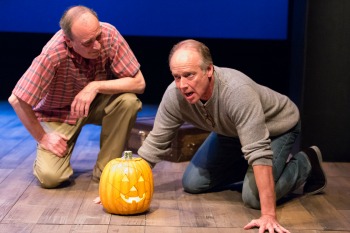 and narrator of the story. Wood perfectly balances his character with moments of humor and anguish. Wood offers moments of eloquence and moments of frustration and he smoothly glides through this show that is imbued with raw emotion. Alda Cortese portrays Mary, the mother of Bill and Paul. Cortese brilliantly plays Mary, and delivers a feisty yet likeable matriarch to this family. Cortese brings forth Mary’s strong personality, but she does it in such a way that Mary becomes endearing to the audience. Peter DeLaurier plays Paul, Bill’s older brother. DeLaurier gives an emotionally charged performance, especially in a flashback scene relating to his experiences in the Vietnam War. Rounding out this cast is Stephen Novelli, who plays Pete, the father of Paul and Bill. Novelli brings out the kindness of Pete and his abundant optimism.

How to Write a New Book for the Bible runs through June 28, 2015. For more information and tickets visit their website at peopleslight.org or call their box office at 610-644-3500.

Final Thought: How to Write a New Book for the Bible is an honest and compelling play that will affect audiences on a deep emotional level. The show is witty and poignant, and possesses an exceptionally talented cast.