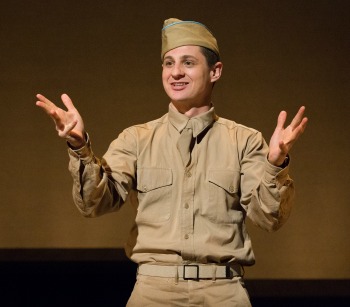 Biloxi Blues at People’s Light is a show that has poignant moments and incredible performances. It is a show that tells a story of one man’s experience during boot camp while addressing serious topics such as anti-Semitism and homophobia within the ranks of the U.S. Armed Forces during World War II. As serious and gritty as this sounds, this play is a coming of age story set during a time when society and attitudes were in a state of change. The production at People’s Light is humorous and a reminder of the innocence of youth, but it also provides a personal glimpse into the experience of being drafted and training for war during World War II.

Biloxi Blues is the second part of the Neil Simon semi-autobiographical Eugene trilogy. The first play in this series is Brighten Beach Memoirs and the last is Broadway Bound. Biloxi Blues can stand alone however, it is a play about recruits in basic training in Biloxi, Mississippi. The play is told through the eyes of Eugene Morris Jerome and about the people he meets in basic training as well as how he contends with different values, survival and rites of passage. Biloxi Blues had its world premiere in Los Angeles, California in 1984 and opened on Broadway in 1985. This Simon play was turned into a film in 1988 starring Matthew Broderick and Christopher Walken. 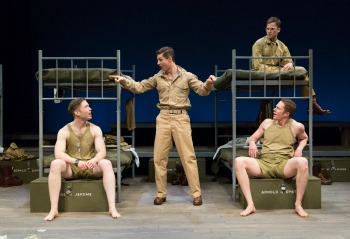 tearing up at other moments. The cast is a group of extremely talented actors, and they create an unforgettable evening of entertainment. James Michael Lambert plays Eugene Morris Jerome. Lambert provides a depth to this role, and he seamlessly transitions from narrator to a participant in the action. One of his best moments is when he realizes the notebook that he writes his thoughts in has been taken by his fellow recruits. His animation and facial expressions are moving as he conveys his horror and outrage that others are reading his deeply personal thoughts. Jordan Geiger plays Arnold Epstein. Geiger superbly captures the fragile nature and intellect of this willful individual. There is a poignant scene where Epstein describes how two men tied him to a pipe after calling him a “jewboy.”  Geiger delivers this scene with eloquence and precision. Pete Pryor portrays Sgt. Merwin J. Toomey, the overbearing drill Sargent. Pryor is stern and loud and he perfectly captures the nature of an “in your face” drill Sargent. However, the thing that Pryor does really well is  gives a humanizing touch to this character, and by the end, he provides an emotional connection to this character through a glimpse into his inner turmoil. Luke Brahdt plays James Hennesey. Brahdt is likeable in this part, and he effectually portrays Hennesey as one of the guys, but there is always a heaviness to his mind that is revealed later in the show. Ben Harter-Murphy portrays Don Carney. Harter-Murphy is excellent in this role, and he provides additional humor, especially in the dinner scene where he explains that the food they are served is the first food he is afraid of. John Mulhearn plays Joseph Wykowski, a recruit that does not quite understand how his use of racial slurs may be hurtful to his fellow recruits. Mulhearn gives this character great intensity and a strong sense of self. Joseph Michael O’Brien plays Roy Selridge. O’Brian gives a notable performance as the smooth talking Selridge. Equally strong in this cast are the women Eugene encounters: Rowena, the prostitute who Eugene loses his virginity to, exceptionally played by Julianna Zinkel, and Daisy, the first girl Eugene falls in love with, magnificently played by Clare Mahoney. 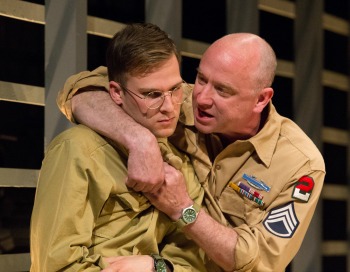 Biloxi Blues runs at People’s Light through May 24, 2015. For more information and tickets visit their website at peopleslight.org or call their box office at 610-644-3500.

Final Thought: Biloxi Blues at People’s Light is full of emotionally charged moments that will provide the audience with a full gamut of human emotion from delightfully humorous to dishearteningly sad. The cast is a group of extremely talented actors, and they all work together to create an unforgettable evening of entertainment.