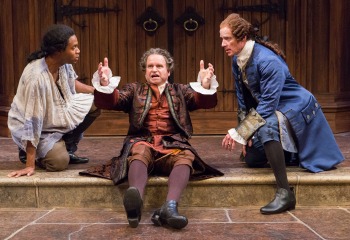 People’s Light and Theatre Company closes their 2013/14 season with an innovative comedy, Bach at Leipzig. This show is a laugh-filled comedy by playwright Itamar Moses, that audiences will delight in. It tells the story of seven rival organists who resort to bribery and blackmail to win a musical post in the Thomaskirche (St. Thomas Church). Bach at Leizig has a remarkable cast that is full of energy, which is sure to keep the audience laughing throughout the play.

Bach at Leipzig takes place in 1722 Leipzig, Germany. The renowned organist at a grand church has died, and what presents itself is an opportunity for seven organists to vie for this coveted and prestigious post. What ensues is a group of men who will build up their credentials, and will do almost anything to become the next organist at the Thomaskirche. The general circumstances of this play are based loosely on actual events, but largely the play is a work of fiction. Under the direction of Peter Pryor, Bach at Leipzig is an entertaining play that is funny, energetic and entertaining, and definitely worth an evening out.

The cast of this show is exceptional, as well as the noteworthy set that was designed by Roman Tatarowicz. There are three characters named 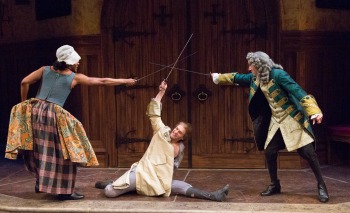 Georg in the play: Georg Balthasar Schott, Georg Lenck, and Georg Friedrich Kaufmann. Kevin Bergen plays Georg Balthasar Schott, who is a character that schemes throughout the show to try to win the prestigious post. Bergen is animated as he connives his way throughout the show. Jabari Brisport plays Georg Lench, a character who is so poor he cannot afford a middle name. Brisport is a presence on stage, and he successfully portrays this likable scoundrel. Stephen Novelli plays Georg Friedrich Kauffman, a good humored aristocrat who is easily confused, but has moments of clarity and deep insight. Novelli does this well, as he makes this character very likable. In addition to the three roles named Georg, there are also three characters named Johann: Johann Martin Steindorff, Johann Christoph Graupner and Johann Friedrich Fasch. Danny Gardner plays Johann Martin Steindorff, who puts on airs and conducts himself in such a way as to appear the superior of all around him. Gardner is full of energy and his swordsmanship was a pleasure to watch. David Ingram portrays Johann Christoph Graupner, who is a character that has achieved greatness, but still suffers from an inferiority complex, especially in his relationship to a certain other composer. Ingram creates the dichotomy of this character well. Rounding out this remarkable cast is Greg Wood who plays Johann Friedrich Fasch. Wood acts as the central narrator character, and he provides a strong performance and entertaining monologues. Wood’s explanation of a fugue is one of the most outstanding monologues of the play.

Bach at Leipzig runs at People’s Light and Theatre Company through August 10, 2014. For more information and tickets visit their website at www.peopleslight.org or call their box office at 610-644-3500.

Final Thought: Bach at Leipzig is a smart comedy that moves quickly and smoothly. The entire cast is strong and energetic, and the show may even provide a few lessons in music appreciation.