PASSION at the Arden is an Emotional Tale 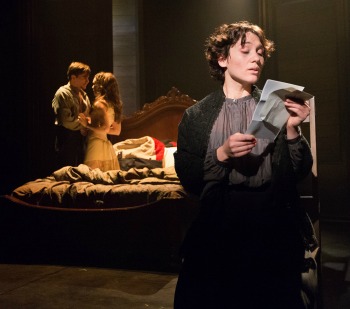 Stephen Sondheim's Passion is one of his lesser-known musicals, although it may be one of his more powerful as it is an intense look at the power of love. This is a show that takes the audience on a journey as it weaves a story that tries to examine what it means to love another. Personally, this was my first time seeing this particular Sondheim production, and it forces the audience to consider the world through someone else's perspective. The show is an emotional journey, and this production at the Arden is one that is captivating and moving.

The inspiration behind the musical Passion comes from a 19th century novel by Ignio Ugo Tarchetti. The story for the musical was adapted from Ettore Scola's film Passione d'Amore. This musical is set in 19th century Italy, and tells the story of a soldier, Giorgio, who is obsessively pursued by his commanding officer’s ailing cousin, Fosca. However, Giorgio’s affections lie with the beautiful and married Clara. This musical asks the question, can Giorgio’s compassion towards Fosca turn into love? Passion has music and lyrics by Stephen Sondheim, and a book by James Lapine. Director, Terry Nolen, writes in his Director’s Notes, “Though [Sondheim] is always successful in giving voice to characters in a way that illuminates their humanity, with Passion, Sondheim goes further, bringing us deep into the minds of these three characters, challenging us to find ourselves in their longings, their desires, their dreams.” Passion is a show that is challenging and heart rending, and the production at the Arden is definitely a show worthy of experiencing.

Passion is a show that asks the audience to embrace the story; it is emotional and haunting. Some audience members will empathize with the 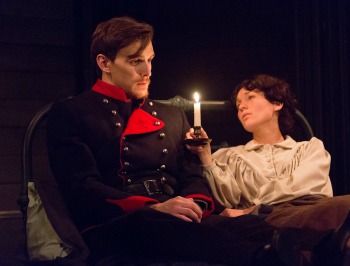 characters and some may find them unlikable. However, this production of Passion at the Arden, under the direction of Terrence J. Nolen, has a strong cast and they breathe life into each of their characters. The role of Fosca is a challenging role because whoever plays this role is playing a very complex woman who is sickly, melancholy and obsessed with Giorgio. Liz Filios is outstanding as Fosca, she capably brings the audience into her character’s psyche and she emotes Fosca’s passion through everything she does on stage. Fosca may come across to some as desperate, but what Filios expertly does on stage is provide the audience with a glimpse into Fosca’s soul to show that she has experienced so much sorrow and longs to be loved by Giorgio. In addition, Filios’s song “Loving You” is beautifully and emotionally performed. Ben Michael plays Giorgio, the handsome captain. Michael is charming and tenacious in this role. Some of his strongest moments in the production are the scenes in which he is reading or writing letters to Clara.  Jennie Eisenhower plays Clara, and she is dazzling as she appears onstage, but there is also an air of desperation in her character as the show progresses. Ben Dibble plays Fosca’s cousin, Colonel Ricci. Dibble is stern and perfectly captures the essence of a commanding officer as well as the loving protector of Fosca. In addition, Frank X provides a captivating performance as Doctor Tambourri, the well intentioned doctor. Passion at the Arden is a show that is emotionally moving and will stay with you long after you leave the theatre. 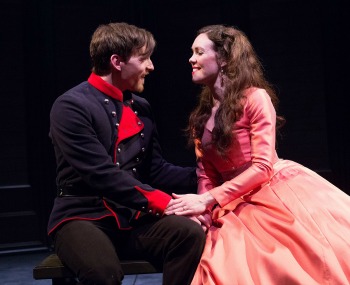 Passion runs at the Arden Theatre through June 28, 2015. For more information and tickets visit their website at www.ardentheatre.org or call the box office at 215-922-1122.

Final Thought: Passion at the Arden is a show that asks the audience to embrace the story; it is emotional and haunting. Some audience members will empathize with the characters and some may find them unlikable. However, this production of Passion at the Arden, under the direction of Terrence J. Nolen, has an outstanding cast is definitely worth seeing.