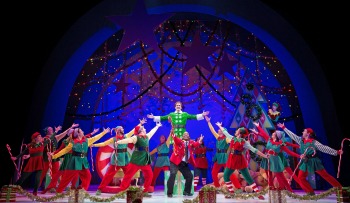 Elf is simply one of those shows that will instill audiences with the magic of the holidays. This show is based on the movie of the same name, and is full of holiday magic, joy and Christmas spirit. Elf tells the story of Buddy, a human child, who has been raised by the elves and Santa at the North Pole. Once Buddy realizes he is human, he travels to New York City to find his father. During the holiday season when we all have many obligations it is easy to forget the spirit of the holidays. Elf is a reminder that we need to stop and remember the importance of family and the childhood joys of the holidays. Paper Mill Playhouse’s production of Elf is a spectacular holiday show that will help rekindle the holiday spirit for all those who need a little extra holiday cheer this year.

The stage version of Elf sticks closely to the movie, but there are enough differences to make it unique. Matthew Sklar and Chad Beguelin wrote the lively score, and Bob Martin and Thomas Meehan adapted the book. Elf is a show that reminds audiences of the importance of family and the spirit of Christmas. It will not only have you laughing and singing, but there are moments that are very touching and pull at the heartstrings.

Playing the role of Buddy the Elf is James Moye. Moye is exuberant in this role, and he is so full of holiday cheer that the audience cannot help 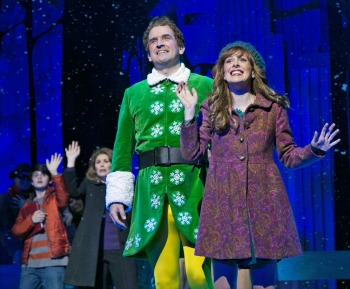 but be imbued with the spirit of the holidays. I adored Moye in this show, but his song “Sparklejollytwinklejingley” is full of seasonal sparkle. Besides a strong performance from Moye, the way the cast transforms the stage in this number is sure to put the audience in a festive holiday mood. Kate Fahrner portrays Jovie, Buddy’s love interest. Fahrner gives this role a balance of edge and amiability. What I liked most about Fahrner’s performance was that even though Jovie is full of disdain, Fahrner gives this character a spark that makes audiences warm to her. Robert Cuccioli portrays Walter Hobbs, Buddy’s father. Cuccioli successfully plays the workaholic father who does not have time for his family. By the end of the show Cuccioli transforms into a man that reconnects with his family and embraces the Christmas spirit. Heidi Blickenstaff plays Emily Hobbs, Walter’s wife and the mother to Michael. Blickenstaff gives Emily cynicism and wit. She gives an outstanding performance as she plays a character that long ago put away her belief in Santa and holiday magic, and by the end of the show regains this belief and the wonder of the holiday season. Michael is played by Jake Faragalli. Faragalli brings a kindness to this role especially in his interactions with Moye. Faragalli and Blickenstaff have a mother-son relationship that feels genuine onstage and their song “There is a Santa Clause” is remarkable. This song embraces the spirit of Santa, and it is one of my favorite moments in this production.  Paul C. Vogt plays Santa, and he is perfect as Santa. He is jolly, and audiences will appreciate his humor during the musical. Playing Deb, Walter’s administrative assistant, is Jessica Sheridan. Sheridan has a strong presence onstage, and her performance alongside Buddy (Moye) in “Just Like Him” is outstanding. One last person I need to mention is DeMone, who portrays the Macy’s Manager. He is flawless in this role as the short-tempered retail manager and he creates a very humorous comedic pairing with Moye.

Elf under the direction of Eric Ankrim is the perfect show for the holidays. The show begins strong with “Christmastown” and ends with the outstanding song, “A Christmas Song.” I need to applaud the ensemble for their amazing energy throughout the show, and the choreographer Josh Rhodes, for the dynamic choreography. Everything in this show gave the production a festive holiday feel from the stunning costumes designed by David C. Wollard to the set designed by Matthew Smucker in the shape of a snowglobe. The Lighting Designer is Charlie Morrison and the Sound Designer is Randy Hansen, both of these individuals deserve credit for bringing the “Sparklejollytwinklejingley” feel to the show. Dominick Amendum is the Musical Director for this holiday delight.

Elf runs at the Paper Mill Playhouse through January 4, 2015. For more information please visit their website at www.papermill.org  or call their box office at 973-376-4343.

Final Thought: Elf is a remarkable show full of first-rate performances, energetic choreography, and the show will instill the audience with a sense of Yuletide cheer. This show is an instant infusion of holiday spirit that will have audiences singing for days after the show.