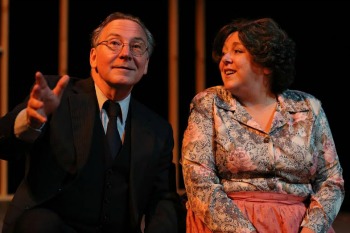 Many have labeled Arthur Miller’s Death of a Salesman, the greatest American play ever written. There are many people and scholars who feel that this is Miller’s greatest work, while I may not hold this view, I appreciate the importance of this play, and the commentary it gives on the “American dream.”  That being said, my job is not to comment on the play itself, but Ephrata Performing Arts Center’s production of Death of a Salesman. From the time I walked through the door of the theatre, I was astounded by the beautiful set (designed by Jordan Jonota,) and the performances in this production are some of the best I have seen at EPAC.

Death of a Salesman, opened on Broadway in 1949, and received the Pulitzer Prize for Drama as well as a Tony Award for Best Play. The play tells the story of Willy Loman, a salesman, who is growing weary of traveling, and has lost site of the American dream. He never got the promotion he expected at work, his welcoming neighborhood has changed with the rise of commerce, and his hopes and dreams are now externalized in his two sons. Loman is defeated; he is no longer the breadwinner he once was for his family.  Death of a Salesman is a common-man tragedy, where the themes of financial crisis and losing one’s identity still resonate in today’s society.

Under the direction of Michael Swanson, Death of a Salesman encompasses the struggle of this all-American family.  In the role of Willy Loman is 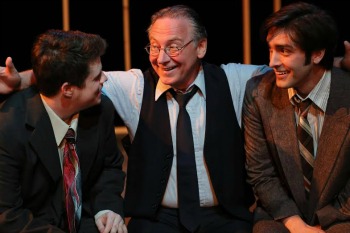 John Kleimo. Throughout the production, Kleimo has the task of portraying Lowman’s lifetime of disappointments, and he does this through his crumpled posture and facial expressions. Kliemo’s stage presence conveys just as much as Miller’s script, and there is a chill-inducing moment where Kliemo’s Willy Loman realizes he is worth more dead than alive. This moment in the play will stay with me for a very long time. Equally as brilliant is Elizabeth Pattey’s portrayal of Linda, Willy’s wife.  She successfully plays the quintessential housewife, but underneath she is a strong and determined woman. The audience feels Linda’s emotions in Pattey’s performance, and personally, I was emotionally drained by the end of the show. In the roles of their two sons, Biff and Happy, are Kevin Fennell and Josh Kirwin. Fennell’s performance as Happy comes across as charming and lighthearted, even in his philandering ways, but there is a depth to him where he wants to keep the peace and happiness within the household, even if that means holding on to pipe dreams and half-truths.  Kirwin plays Biff, the sensitive and quiet character in the first act, who evolves into his own man with his own determination, and who saw through the veil of lies his family has been telling themselves for years. There is a chemistry and affinity between these four fine actors that makes this a strong production. In addition, the supporting cast of this show is equally as strong, and the performances within the entire show are all stellar.

Death of a Salesman runs at the Ephrata Performing Arts Center through September 20, 2014. For more information and tickets visit their website at www.ephrataperformingartscenter.com or call their box office at 717-733-7966.

Final Thought: Death of a Salesman at Ephrata Performing Arts Center is full of outstanding performances that encompass the story of the all-American family. It is full of emotions and rising tempers, and is definitely a show that will have audiences talking about and contemplating life and the “American dream” long after the play is over.