Closing out Ephrata Performing Arts Center’s 2016 season is the beloved musical Oliver! This musical which is based on the iconic Charles Dickens’ novel, Oliver Twist, takes the audience on a journey through Victorian London where a young boy, Oliver, is living a life of poverty, experiencing abuse and is taken in by a group of youths trying to survive on the unforgiving streets of London. Director and Choreographer Tricia Corcoran does a wonderful job at bringing this show to life on EPAC’s stage, and the show is full of strong performances and vocals. Oliver! at Ephrata Performing Arts Center is a charming production, and everyone in this show works together to make this show a success.

Oliver! is a musical that premiered on the West End in 1960 and then had its Broadway premiere in 1963. The musical has music and lyrics by Lionel Bart. This musical based on the novel by Charles Dickens and tells the story of a young boy, Oliver, who lives in a workhouse. He is eventually sold into apprenticeship to undertakers, the Sowerberrys. Oliver eventually escapes and enters a world full of pickpockets and deceit.  However, Oliver meets a few kind souls along the way. One of the things that helped set the stage for the musical Oliver! is that members of the audience are handed something similar to a broadside along with their program that helps explain the time period of Oliver! I need to applaud EPAC for this because small details such as this are important provide a historic context for a period piece such as this. In addition the set designed by Ben Rosenzweig and the costumes designed by Mercedes Maccarino also help transport the audience to nineteenth century London.

The thing about Oliver! is that it features a large number of children who have to portray individuals in desperate situations, they are a group who 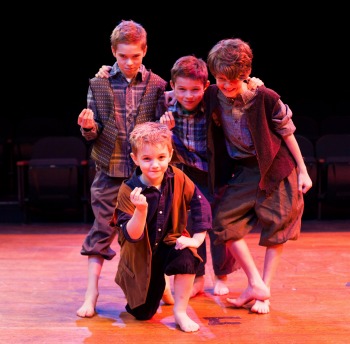 are half-starving and have a rough life. I felt that the children featured in this show begin the show strong with “Food, Glorious Food.” Playing the role of Oliver Twist is Aleko Zeppos. Zeppos is perfectly innocent in this role, and this comes forth particularly well in “Where is Love.” Ethan Reimel portrays the famous pickpocket, the Artful Dodger. Reimel and Zeppos have a great chemistry onstage and it does come across that Dodger is taking Oliver under his wing. In addition, “Consider Yourself” is a jovial number. In the role of Fagin, a scoundrel who takes in street urchins and teaches them to pick pockets, is Preston Schreffler. Schreffler steals the show with his performance, and as many times as I have seen Oliver! this is the best performance I have seen. Schreffler does a wonderful job with “You’ve Got to Pick a Pocket or Two” and “Reviewing the Situation.” What Schreffler does really well is bring out the humanity of Fagin to show that he steals to survive. Jeff Fisher plays Bill Sykes, a man who is one of Fagin’s former pickpockets. When Fisher first appears he gives Sykes a terrifying stance, and his performance is effective as this abusive bully.  Kristie Ohlinger portrays Nancy, the girlfriend of Bill Sykes and one of the people who is kind towards Oliver. Ohlinger is strong in her vocals in “As Long as He Needs Me” and “Oom-Pah-Pah.” What struck me about Ohlinger’s performance is the raw energy she provides to this character who is torn between doing what is right and her safety. Other members of the cast that need mentioning, Joe Myering and Elizabeth Pattey who play Mr. Bumble and Widow Corney play their roles with zeal and their vocals in “I Shall Scream” soar. In addition, Karey Getz and Carl Bomberger as Mr. and Mrs. Sowerberry are perfectly gruesome. They shine in their song, “That’s Your Funeral.”

Oliver! runs at Ephrata Performing Arts Center through December 17, 2016. For information and tickets visit their website at www.ephrataperformingartscenter.com or call the box office at 717-733-7966.

Final Thought: Oliver! at Ephrata performing Arts Center is an excellent production as it will warm audiences’ hearts, and the songs that people are familiar with such as “Consider Yourself” and “Oom-Pah-Pah” will have audiences humming for hours after the show. The cast is strong and songs such as “Reviewing the Situation” and “As Long as He Needs Me” are performed with exuberance and power.