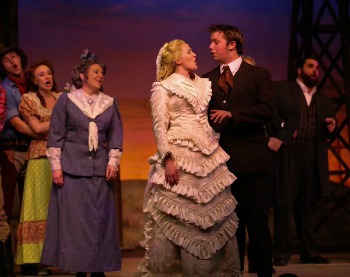 When Oklahoma! opened over seventy years ago, it was unlike anything Broadway had seen. The show set itself apart from others of its time by being set in a rural territory, it did not have a splashy opening number and at the end of act one, there is a fifteen-minute ballet sequence. Today, this show is not viewed as the groundbreaking show it once was, but there is a particular charm about Oklahoma! that still draws a crowd. The production of Oklahoma! at Dutch Apple Dinner Theatre is appealing with lively dance numbers and an engaging cast.

The original Broadway production of Oklahoma! opened in 1943 and ran for 2,212 performances. There were several revivals of the show, and there was a 1955 film adaptation. This musical was the first collaboration between composer Richard Rodgers and lyricist Oscar Hammerstein II, who also wrote the book. The plot for Oklahoma! revolves around two groups of characters. The first is Laurey, a young farmgirl, who is in love with Curly and is playing hard to get. This storyline revolves around a box social, and although Laurey wants Curly to take her, she refuses his offer, and goes with the sinister farm-hand, Jud. The second storyline revolves around Ado Annie, and her two suitors Will Parker, and the peddler, Ali Hakim. The story of this show is rather simple, but it is one that audiences still love many decades later.

Playing the role of Laurey is Kayleen Seidl. Seidl is stubborn and self-assured in this role, and I enjoyed her performance. Her vocals in “Many a 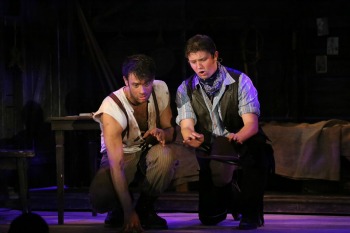 New Day” are strong and endearing. Christopher Lewis portrays Curly, the cowboy. Lewis is charming throughout the show, and he seamlessly glides from dialogue to song. When Seidl and Lewis are combined there is a strong chemistry between these two actors, and their rendition of “People Will Say We’re In Love” is beautiful. Justun Hart portrays the sinister Jud Fry, and this is a role where I applaud the actor and director, Dean Sobon, for taking this character to a new level. Many times, I have seen Jud played as a misunderstood character, but in Dutch Apple’s production, Hart gives a compelling performance as the tormented Jud Fry. As soon as Hart enters the stage, audiences can see Jud’s torment. Hart brings out the dark and threatening air of this character, and his vocal in “Lonely Room” is the strongest in the production. As much as I enjoyed Oklahoma!, I thought Hart’s performance, in particular, was exceptional and unique to any production I have seen previously. 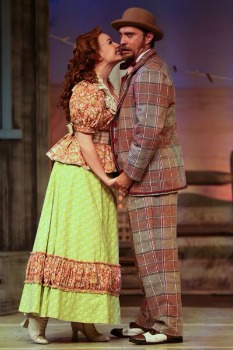 Theresa Walker is delightful as Ado Annie. Walker is sassy and full of energy. Her performance in “I Cain’t Say No” is lively and animated. Will Leonard plays Will Parker, and Leonard is full of vigor and personality. Leonard is a joy to watch, and I appreciated his performance in “Kansas City” where he shows off his dancing, singing and lassoing skills. Craig Smith portrays the peddler Ali Hakim. Smith is dynamic in this role, as well as captivating and hysterical. Lisa Coday plays Aunt Eller, who is usually funny and saucy. However, Coday seemed a bit off the mark the evening I saw the show, and she did not truly convince me that she could go toe to toe with these men. For me, she fell flat in this performance. One last thing I need to mention about this production of Oklahoma! is the wonderful choreography by Ford Haeuser. The choreography is strong throughout the production, and the ballet in the “Dream Sequence” is stunning.

Oklahoma! runs at Dutch Apple Dinner Theatre through August 1, 2015. For more information and tickets visit their website at www.dutchapple.com or call the box office at 717-898-1900.

Final Thought: Oklahoma! is an outstanding and well-crafted production of this classic musical. It is a show audiences still love. The production at Dutch Apple Dinner Theatre has wonderful performances and is entertaining for the entire family.