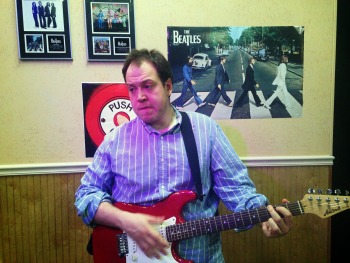 When I was in grade school, I remember coming home and seeing my parents listening to news reports about the assassination attempt on President Reagan. That date was March 30, 1981. The person who attempted to assassinate President Reagan was John Hinckley Jr. From that date on all I knew of that name was that he was the person who tried to kill President Reagan, I knew nothing else about Hinckley. New City Stage provides a glimpse into the life of John Hinckley Jr., and attempts to show a story of a man with mental illness. I applaud New City Stage and their successful production of Hinckley, this is a play that will engage audiences minds long after the show is over.

Hinckley is the story of John Hinckley Jr., the person who fired six shots at President Reagan on March 30, 1981 outside the Hilton Hotel in Washington D.C. His motivation was not politically charged, it was fame, and to get the attention of actress, Jodi Foster. New City Stage calls this production, “a pop culture fantasia that explores one of our greatest media obsessions and its affect on our national politics.”  Hinckley explores the inner psyche of Hinckley by examining events in his life that led up to the assassination of Reagan. This show does not end with the assassination, it continues to explain what happened to Hinckley after the assassination, the trial, and even in the present day. Hinckley brings John Hinckley Jr. into the spotlight and tells his story as well as sheds light on a person who is living with schizophrenia.

Hinckley is a play written by Philadelphia playwright, Ginger Dayle. This marks Dayle’s playwriting debut. I commend Dayle for the amount of 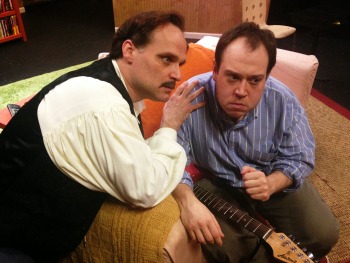 research that went into writing this play, because she conveys information about Hinckley without any agenda. She presents the facts about Hinkley, which tells the story of a man with undiagnosed schizophrenia. I applaud this effort because any play that makes me want to know more about the subject of the play has done its job in peaking my interest in the topic. Playing the role of John Hinckley Jr. is Sam Sherburne. Sherburne brings a humanity to his character, and embodies a person with mental illness. The part of the play that stood out for me was the scene surrounding the assassination of John Lennon. Sherburne states, “John Lennon died and I did too.” This scene demonstrates the major affect this particular death had on John Hinckley Jr. Russ Widdall plays a variety of characters from John’s father to John Wilkes Booth. At times, he adds humor, but he also adds a voice to all the people who influenced Hinckley’s life. Widdall’s energy brings to life these well-known figures from history and characterizes them well. Rounding out this cast is Meghan Cary who also plays a variety of characters from John’s mother to Jodie Foster. Cary also wrote the music for Hinckley, and performs her songs throughout the show. I particularly enjoyed these songs because they gave another layer to the show and they were performed beautifully. If I had one criticism of the production, it would be that in some instances it was difficult to determine who the variety of characters that appeared on stage represented. These characters are representative of people who influenced Hinckley such as John Wilkes Booth and Robert DeNiro. Although explanation of why these people are significant appeared in the program, I found it difficult to understand who was being represented at times, as there was no spoken presentation of some of the characters. However, this is a minor criticism, this play is one that is daring, finely crafted and filled with superb actors portraying significant historical characters.

Hinckley runs through March 30, 2014 at the Adrienne Theatre 2030 Sansom Street, in Philadelphia. For more information and tickets please visit New City Stage’s website at www.newcitystage.org or call their box office at 215-563-7500.

Final Thought: Hinckley is a skillfully crafted play that will have audiences talking about the show long after it is over. It is definitely worth seeing especially for those who have a curiosity about this event in history.