Music Review: THIS BEAUTIFUL CITY from THE MICHAEL FRIEDMAN COLLECTION is an Exceptional Collection of Friedman’s Work 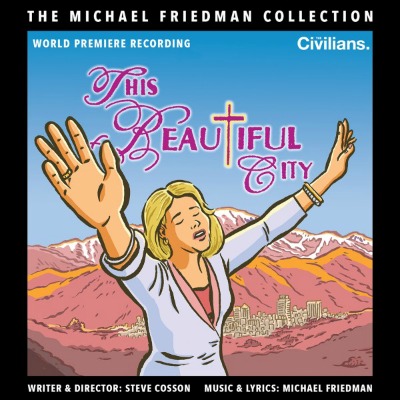 One of the things I enjoy about listening to music is discovering the backstories about the artists behind the music. One of my new discoveries is the new collection of music by Michael Friedman. I am familiar with Friedman’s work because he wrote the music and lyrics for Bloody, Bloody Andrew Jackson. I listened to the music for this show over and over again when it first came out, and I continue to enjoy the music and brilliant lyrics from the musical. Needless to say, I was thrilled to realize a collection of the composer’s music was released recently. The Michael Friedman Collection is a collection of nine Friedman scores that will be released over a period of time. The first three have recently been released: This Beautiful City, The Great Immensity and The Abominables. One of the things I love about these first three releases is Friedman’s vividness in how he tells a story through his music and lyrics. Also, it feels as if he took a subject and created music that transports the listener into the world of the story. I am so grateful to Ghostlight Records and The Civilians for releasing this previously unreleased collection of Friedman’s music.

In 2017 Michael Friedman passed away, and Broadway lost one of its exceptional composers. Friedman is known for writing the music and lyrics for Bloody, Bloody Andrew Jackson, Love’s Labour Lost and Fortress of Solitude. In addition, he had established a relationship with the New York-based theatre collective, The Civilians. In 2018 The Civilians announced the creation of the Michael Friedman Legacy Fund, which is an initiative to preserve and release previously unreleased music and lyrics by Friedman. There will be nine Friedman scores released in total, and three of those recordings are now available through Ghostlight Records.

The first score I listened to in this collection, This Beautiful City, is about the evangelical movement in Colorado Springs as well as the 2006 Ted Haggard scandal. The music for this show is told from the perspective of a number of different characters who address the place of religion in their community. One of the highlights on this recording is the song “Whatever” performed by Marsha Stephanie Blake. Blake energetically sings about the difficulty of not being a true believer, but attends the youth events anyway because “They got free Starbucks and it’s not like going to church.”  This is a fun and entertaining song. Another highlight from the album is the song “An Email From Ted.” This song, wonderfully performed by Brad Haberlee, has lyrics about Haggard traveling and fraternizing with well-known political leaders. The song is witty with lyrics such as “Barbara Walters is working on a story about heaven, will interview me, and get some supporting shots from the church, since we believe in heaven, we are in fact a good source.” This song is a fun ditty. In all honesty, I did not know much about This Beautiful City, and I highly enjoyed listening to the lyrics. It is a fascinating recording and I would recommend it to anyone who is a fan of Friedman’s previous works or enjoys listening to music with witty lyrics. Please check back next week for my thoughts about another work in The Michael Friedman Collection, The Great Immensity.

The Beautiful City is available for purchase through Ghostlight Records. Please visit www.ghostlightrecords.com/michael-friedman/this-beautiful-city.html for more information and to purchase this recording.