Music Review: The Doubleclicks’ New Album THE BOOK WAS BETTER is an Exceptional Delight 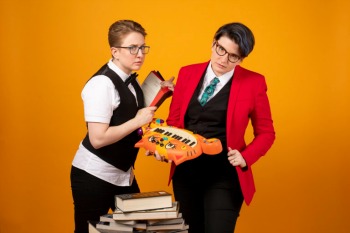 This week for my Music Monday post I thought I would talk about a new group I discovered recently at my local indie bookstore, the group dubs itself The Doubleclicks. If you are unfamiliar with the Doubleclicks they are a nerd-folk musical duo made up of siblings Laser Malena-Webber and Aubrey Turner. What I love about their music is that not only is it unique and funny, but in addition the lyrics convey serious and self-empowering messages. Above all, this group is a lot of fun to see live, so if they are coming to a city near you I would highly recommend going to see them. I was thrilled to discover this group and their new album, The Book was Better. The music on their new album is full of catchy tunes with fun lyrics and messages of empowerment and self-acceptance. I honestly, have been listening to this music practically nonstop since it was released last month.

One of the things I really enjoy about the Doubleclicks is the memorable lyrics and music. In addition, the group’s music includes a cello and a cat keyboard, which personally, I think is awesome. The first exposure I had to this group was a video in which they perform the theme from The Great British Bake Off, and they play it with a cello and cat keyboard. If you need to brighten your day, google this, I promise it will make your day better! Their new comedy album, The Book was Better, is equally as enjoyable. According to the Doubleclicks their album is about “gender, dogs, cats, anxiety, Halloween, and pizza are some of the things. But the big theme is this: We spend too much time yelling on the Internet, and we should all try something else….Go to a museum. Go roller skating and break your arm. Try to throw a birthday party and don't cancel it when you get overwhelmed at the very idea of human interaction.” There is a lot of humor in the lyrics, but there is also a lot of heart. They tackle some serious topics like social anxiety, body image and gender identity. Even though the Doubleclicks are considered a comedy duo I find them insightful, passionate and they promote empathy. I think their music is especially important in the times that we live in because they are all about empowerment and embracing the things that make you unique.

As I mentioned previously, I have been listening to the Doubleclicks’ album, The Book Was Better, consistently since I saw them in concert at the 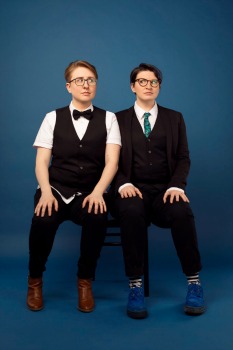 beginning of May. As much as I could write why I love each song on their album I will keep it to my top three songs. My favorite song on the album is “Clifford the Big Red Dog.” Yes, it is about Clifford the dog from the children’s books. However, it is also about body image. The song begins with this line, “Shut up the voices that tell you you're the wrong size/Or say that you're too specific to represent/The problem comes not from their subject, but just from their eyes.” I adore this song, and it is a song that stays in my head all day. As much as this song is fun, it also addresses body image, which I think is a topic that is not often addressed. Another one of my favorites on the album is “Super Beatrice.” The song is about a heroine who has superpowers ranging from fighting crime and saving the innocent from harm to waking up without an alarm and lighting up a dark room. Basically this song is about self-care and being prepared. Again, another great song with lyrics that will stay with you throughout the day. The last song I am going to talk about is “I’m Winning.” On the surface the song is about video games, but as you listen it is revealed this song is about self-acceptance, being yourself and gender dysphoria. A couple of the lyrics from this song I love are: “Listen to me and love with your heart. . . . You can help a person have a better life.” It addresses being accepting of everyone. Throughout the album there are a lot of messages about acceptance, being kind and taking care of yourself. What draws me in particular to this group is how all the songs in some way feel personal and there is strength that comes with the music and lyrics.

As a final thought I will say go buy the Doubleclicks’ new album, The Book Was Better. It is fun and humorous and contains positive messages we all need reminded of once in a while. For more information about the Doubleclicks and to buy their album visit their website at www.thedoubleclicks.com.

Photos courtesy of The Doublecliicks

Thank you so much for the review!! You totally get us :)

I very much enjoyed this album. Thank you for the review.