Music Review: Ghostlight Records Presents an Ingenious Recording of THE MAN IN THE CEILING 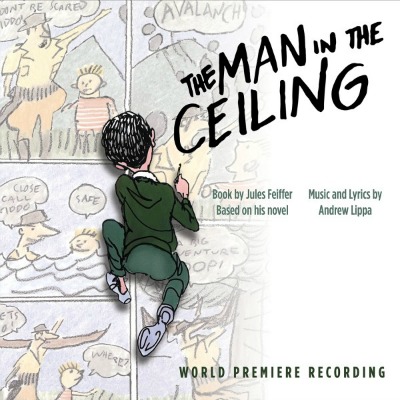 As soon as I heard that there was a new recording of a musical with music and lyrics by Andrew Lippa, I knew I needed to hear it immediately. As soon as I saw the art work for the The Man in the Ceiling I was further intrigued. Personally, I was not familiar with Jules Feiffer’s graphic novel The Man in the Ceiling, but I did know him from another one of his books, The Phantom Tollbooth. The artwork for the digital booklet reminded me of some of my favorite books as a child as well as The Phantom Tollbooth. Once I started listening to the music and lyrics I was instantly drawn into the story of the musical. One of the things I adore about listening to this score is the passion behind Lippa’s music and lyrics. The music feels inspired as if Lippa felt a personal connection to the story and it comes through in his lyrics for the show. If you are a fan of Lippa’s music or even if you have a desire to listen to something that feels imaginative I would highly recommend The Man in the Ceiling.

The Man in the Ceiling is based on the 1995 graphic novel by Jules Feiffer. The musical is about a twelve year old boy, Jimmy, who is bad at sports and he does not really like life in the seventh grade either. However, Jimmy draws wonderful cartoons and would like to be recognized for what he likes doing most – making comic books, inventing characters and creating adventures for his characters. Feiffer also wrote the book for the musical and the music and lyrics are by Andrew Lippa. The Man in the Ceiling opened at Bay Street Theater in Sag Harbor, NY for its first production on June 3, 2017. What comes through in the music is energy and pure joy.

The Man in the Ceiling is a world-premiere recording by Ghostlight Records and after hearing it this week, I find I am frequently listening to this music. One of the elements I enjoyed while listening to this show is how Jimmy really wants to be good at illustrating comics and how his character creates stories and strives to be successful at drawing certain elements. One of my favorite songs on the recording is “Hands.” This song is wonderfully performed by Grady Miranda (Jimmy) who is struggling with his ability to draw hands for his characters. One of the lines from the song is “Who’s upset with superheroes with their fingers inside their pockets? . . . Who would notice when that superhero’s up in the sky? Not I!” The lyrics of this song made me chuckle, but I also found the struggle of this young boy relatable. No matter what a person’s passion is there is always at least one thing that they have to overcome to be successful. Another one of my favorite songs on this recording is “Like Your Son” beautifully performed by Kate Baldwin (Mother.) This is a gorgeous ballad in which the character of Mother is angry at Father for not accepting their son. She sings, “But your boy makes no sense to you, Your boy doesn’t play, Your boy spends his days alone, Drawing on all fours, Lost behind locked doors.” This is an incredible song full of emotion regarding how she realizes that Father does not accept their son for who he truly is. Another highlight of the album is “I Do What I Do” performed by Uncle Lester (Andrew Lippa.) This song is full of energy and is sure to stay in your head for the rest of the day. One of the things I like most about this number is the inspiring lyrics about perseverance and doing what you do best even if people criticize your work. This song has so many great lyrics that are relevant to pretty much anyone. One last song I want to mention is “Draw Your Own Conclusion.” This is the moment in the show that Father finally understands Jimmy’s talent and passion. It is a touching song with vocals by the entire cast. This is another cast recording that takes the listener on a journey. As you sit and listen to the music and lyrics the listener can understand what is happening in the show and the plot. Not every cast recording does this, but The Man in the Ceiling definitely does.  Lippa’s music and lyrics deftly tug at the emotional heart strings and the music will speak to anyone who has a passion for something that sometimes others just do not understand.

The Man in the Ceiling is now available for digital download through Ghostlight Records and the CD will be available June 14, 2019. For more information and to download this recording please visit www.ghostlightrecords.com/the-man-in-the-ceiling.html.

Final Thought: Ghostlight Records’ recording of The Man in the Ceiling is a cast recording full of emotion, creativity and passion. Andrew Lippa’s music and lyrics are stunning and inspired. They will take the listener on an emotional journey that is imaginative and full of heart. This is definitely a cast recording that I will be listening to frequently in the near future.