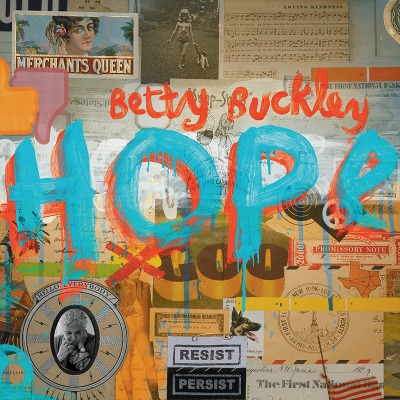 Before Betty Buckley set off on the National Tour of Hello, Dolly! she recorded a live album, Hope, at Joe’s Pub. The concert was originally titled, “Story Songs #2.” The recording is full of many wonderful songs with various styles of music such as Americana, pop, rock, and standards. Buckley has a remarkable ability to tell stories through her song choice. Each rendition is full of emotion as she recalls different memories from her life. These numbers will definitely tug at the listeners’ emotions as she sings and tells stories. One of my favorite stories she recalls on this recording is about Gilda Radner. If you are a fan of Buckley or enjoy a wonderful solo recording then I would highly recommend Hope. It is a recording that is filled with energy, a positive message and wonderful vocals.

On a personal note, I grew up watching Betty Buckley on Eight is Enough and then came to realize she played Grizabella in the Broadway production of Cats. She is one of the many reasons I fell in love with theatre. I have been a fan of Buckley and her many talents for as long as I can remember. The recording of Hope encompasses her many talents as a performer, singer and storyteller. In addition, this is Buckley’s 18th solo album. It was released in June 2018 and produced by Palmetto Records.

Hope is full of wonderful and exquisitely performed music and I could easily write about all the positive aspects of each song. However, for the sake of brevity I will only highlight my top three favorites from the album. The first song I immediately fell in love with is the song “Hope,” written by Jason Robert Brown. It is infused with a message regarding maintaining ones optimism in the current times in which we live. The part of the song that I personally found inspiring is: “I sing a song about hope though I can’t guarantee there is something real behind it, we have to show our daughters we can find it, and so today, when life is crazy and impossible to bear, it must be there, fear never wins that’s what I hope …. The work begins.” These lyrics, in addition to Buckley’s passionate vocals, make this a powerful song. Another song I especially enjoyed on the album is “Prisoner in Disguise,” written by John David Souther. I love the story behind why she chose to sing this particular song. In addition, the way Buckley infuses this song with heartfelt emotion makes this number shine. The last song I want to mention is “Quiet,” written by Paul Simon. Buckley performs this song with genuine sentiment. This is what makes this recording so memorable – Buckley’s ability to showcase her passion and emotion in each song, which makes each number on this recording remarkable. Lastly, I need to mention the musicians showcased on this recording. Christian Jacob on piano, Tony Marino on bass, Oz Noy on guitar, and Dan Rieser on drums.

Betty Buckley’s Hope is available for purchase through www.bettybuckley.com/store.