MOTHERS AND SONS at Philadelphia Theatre Company is an Emotional Journey 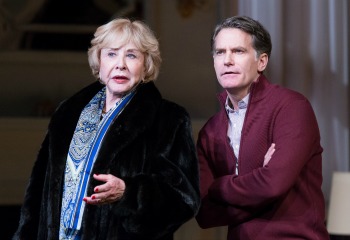 Philadelphia Theatre Company continues its 40th anniversary season with the Terrance McNally play, Mothers and Sons. The show tells the story of a mother, Katharine Gerard, who lost her son to AIDS. Katharine goes to visit her son’s partner, Cal, to give him her son’s journal. What Katharine finds is that Cal has moved on and has a happy life with his husband, Will, and their son, Bud. Mothers and Sons at Philadelphia Theatre Company is a moving production that is provocative and heartfelt.

Mothers and Sons takes place 20 years after the events in McNally’s 1990 television play, André’s Mother.  Mothers and Sons had its world premiere at the Bucks County Playhouse in 2013, and opened on Broadway in March 2014. In 2014, the show received two Tony nominations for Best Play and Best Performance by an Actress.

The current production at Philadelphia Theatre Company, under the direction of Wendy C. Goldberg, is an enriching show with a cast that delivers moving and emotionally wrought performances. Michael Learned plays Katharine Gerard, a woman who is trying to come to grips with her life and the death of her son. Learned’s character is lonely and angry, but she manages to give a warmth to her character that made the audience empathetic towards her. Overall, I enjoyed Learned’s performance as she successfully conveys her character’s conflicted emotions regarding her son’s death, although in a specific scene involving dialog related to desiring revenge and vengeance for her son’s death, the dialog seemed to lack the conviction necessary to completely convey the character’s extreme sense of anger and outrage. James Lloyd Reynolds plays Cal Porter. Reynolds’s performance is strong as he gives Cal kindness, but also portrays how uncomfortable and frustrated he is with Katharine. Hugh Kennedy plays Will, Cal’s husband. Will is strong and non-apologetic for who he is. Kennedy is exceptional in this role; he is energetic and thoughtful. The dynamic between Reynolds and Kennedy is outstanding and their chemistry onstage provided the audience the feel of a believable and emotional relationship. Rounding out this cast is Jacob Wilner as Bud (Wilner alternates in this part with Patrick Gibbons Jr.) I highly enjoyed the innocence and curiosity Wilner gave to this part, as I also appreciated the interaction between Wilner and Learned especially in the final scene of the show.

I also need to mention the set for this show. This set was designed by John Arnone and has incredible attention to detail. In addition, Richard St. Claire is the Costume Designer, Josh Epstein is the Lighting Designer and Daniel Perelstein is the Sound Designer.

Mother and Sons runs at the Philadelphia Theatre Company through March 8, 2015. For more information and tickets visit their website www.PhiladelphiaTheatreCompany.org or call their box office at 215-985-0420. 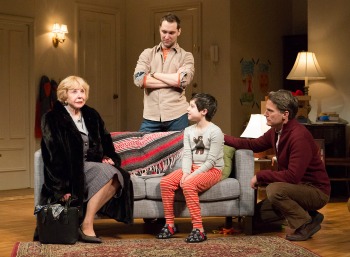 Final Thought: Mothers and Sons at Philadelphia Theatre Company is a provocative and honest play. The cast of the production all deliver fine performances. If you have not seen Mothers and Sons and enjoy a thought provoking and moving play, you should plan to see this production.