METAMORPHOSES at Arden Theatre is Spellbinding 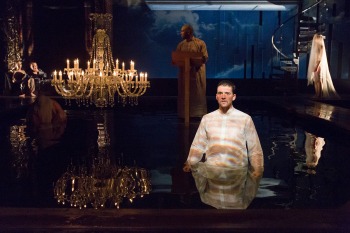 Ever since the artistic director, Terry Nolen, announced that the Arden Theatre was producing Metamorphoses in their 2015/16 season and utilizing a pool in the staging of the show I have been anticipating this experience. As I walked into the theatre the night I attended Metamorphoses the first thing that came to mind was that the set was stunning. Not only, was there a remarkable set, but the play itself and the performances were entrancing as well. Metamorphoses is a major theatrical event that will spellbind audiences with its fascinating theatrical storytelling.

Metamorphoses is adapted from the classic poem of transformation myths by Ovid.  The play was written and originally directed by Mary Zimmerman. The myths told during the play develop around and in water. The myths include such characters as Midas and Phaeton. This is my first experience seeing Metamorphoses and what really struck me about this particular production is the expressive storytelling. The wonder of this play is that the story of these myths were written down over 2000 years ago and through the wonder of this stage production the stories still reverberate with relevance even today.

Under the direction of Doug Hara, this production of Metamorphoses is inspiring and smart. The entire cast portrays several characters 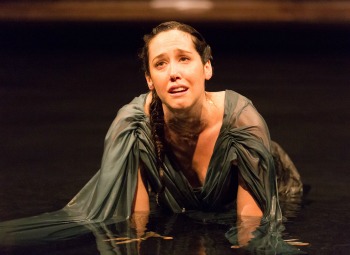 throughout the show, however, I will mention the highlights of the production. Playing the role of Midas is Christopher Patrick Mullen. Mullen excelled as a story teller in this role while pulling the audience into his tale with his timbre and candor. Leigha Kato portrays Midas’s daughter, and she is full of life. The moment where Midas turns his daughter to gold is incredibly powerful and Mullen and Kato deserve applause for this heartbreaking scene. Krista Apple-Hodge is majestic and has great poise as Aphrodite. Alex Keiper transforms in each scene that she is in. One moment she is full of emotion and heartbreak and the next scene she is vibrant and full of energy. Keiper was strong throughout the production, and she was effervescent as the wood nymph, Pomona.  Brandon Pierce is lively and animated as Vertumnus, who desperately wants Pomona to notice him. Another highlight of this show a scene in which Phaeton, comically played by Steve Pacek, is telling his therapist, wonderfully portrayed by Sharina Martin, that he longs for his father’s acceptance. This tale is told with a modern twist, as Pacek is floating on a yellow pool raft as he confides in his pool side therapist, and this scene adds levity to the production. Clare O’Malley plays Eurydice and coveys a sense of sereneness to the scene in which Orpheus loses her forever on the path to the land of the living. Sean Bradley’s Orpheus is full of desperation and passion as he tries to bring Eurydice back from the underworld. Rounding out this cast is Lindsay Smiling who plays Bacchus as well as other roles, and he has a commanding presence onstage in this role. 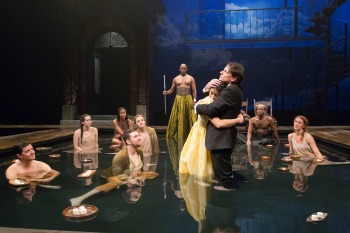 I would be amiss if I did not talk about the amazing set for this show. The onstage pool, along with a set that depicts the heavens and the incredible lighting all make this set, designed by Brain Sidney Bembridge, simply stunning. The Lighting Designer is Thom Weaver and the Sound Designer is Christopher Colucci. Olivera Gajic designed the beautiful costumes.

Metamorphoses runs at the Arden Theatre through November 1, 2015. For more information and tickets visit their website at www.ardentheatre.org or call the box office at 215-922-1122.

Final Thought: Metamorphoses at The Arden Theatre Company is a striking work of theatrical art, with a stunning set, and it is an exceptional production. This show is a fascinating play that engages the audiences’ imagination and contains first-rate performances from beginning to end.