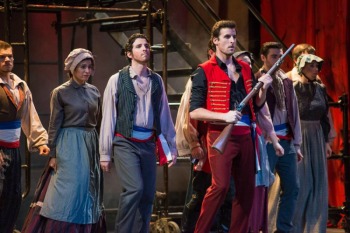 The current show onstage at the Media Theatre is Les Misérables. This show, which is always an audience favorite, tells the story of love and loss amid the Paris Uprising of 1832. The thing about Les Misérables is that it expects a lot from its audience, the audience must invest their attention and emotions in the story that is evolving onstage. It is not a show typical for the holiday season that is colorful with toe-tapping musical numbers. However, Les Misérables at the Media Theatre has some great performances that will remind audiences why this musical has been popular for over twenty-five years.

Alain Boublil and Claude-Michel Schönberg's Tony Award-winning musical Les Misérables is based on the Victor Hugo’s French historical novel of the same name. The musical takes place in 19th century France where the paroled French prisoner, Jean Valjean, seeks redemption after being imprisoned 19 years ago for stealing a loaf of bread to feed his starving sister’s child. Javert, a relentless constable, purses Valjean for decades for breaking his parole. The score for this show is beautiful, as it tells the story of the Paris Uprising of 1832 and of a man who is searching for redemption.

Each time I see Les Misérables I am reminded of what a layered production the musical is with the music and the plot; each time I see the show I find something new in it that I did not experience before. The Media Theatre delivers a professional and bold production of Les Misérables this holiday season under the direction of Jesse Cline. Playing the role of Jean Valjean is John D. Smitherman, and he delivers a beautiful and emotional rendition of “Bring Him Home.” James Zannelli plays Inspector Javert, who pursues Jean Valjean to bring him to justice. The scenes between Zannelli and Smitherman are intense, and “The Confrontation” was full of fierceness and passion. In the role of Fantine is Elisa Matthews. Although her vocals in “I Dreamed a Dream” were beautiful, the scene between Valjean and Fantine when they sing, “Come to Me” was emotionally moving. The best vocals in the show belong to Sean Thompson who plays Enjolras. His vocals throughout the show are strong and stunning, and his performance throughout the show was full of fieriness. I loved the storyline and performances of Lauren Cupples as Cosette, Zach Monroe as Marius and Sarah Moya as Eponine. The production at Media Theatre made me care emotionally about these three characters, who often time get lost in the storyline of Les Misérables. Cupples, Monroe and Moya shine in the number, “A Heart Full of Love,” where the vocals are full of heartfelt beauty. In addition, Moya’s rendition of “On My Own” is strong and full of sentiment.  Adding a bit of humor to the production are Kelly Briggs and Susan Wefel as the Thenardiers. Briggs and Wefel are animated and energetic in “Master of the House.” In the roles of the three young characters in the show are Tim Woodward as Gavroche, Lexi Gwynn as Young Cosette and Jill Spaeder as Young Eponine. These three fine young actors do a fantastic job and project poise during their scenes.

The thing about Les Misérables is that in order for the show to work it needs to depict intensity and emotion throughout the production. This job falls not only on the lead actors, but also on the ensemble. The ensemble did a remarkable job throughout the show. The best songs in this production were “Do You Hear the People Sing” and “One Day More.” The members of the ensemble that rounded out this cast are: Aaron Atkinson, Geoff Bruen, Ashley Douglas, Dann Dunn, JP Dunphy, Terrance Hart, Lucas Kappler, Patrick Ludt, Jacqueline Elyse Rosenthal, Pat Shane, Sharon Spaeder, Ashley Sweetman, Anna Rose Upton, Rhiannon Charney, Katie Davis, Kurt Hartwell, Thomas Lock, Julia Seeley, JD Triolo and Michael Wells.

I applaud the Media Theatre for the use of digital media that they used to strengthen the set. This really worked well for me in the scene in act two when they are in the tunnels and Valjean sings “Bring Him Home.” However, there are moments in the show that the digital media took me out of the moment of the scene because the imagery being projected was distracting. I found this to be the case with the crucifix during “Stars,” but more so in act two in the final battle scene. In this intense moment, we quickly switch from a quaint cobble stoned street scene to an image of Tiananmen Square complete with 20th century Chinese tanks. This famous image of the student barring the tanks passage from the uprising in Tiananmen Square in China in 1989 took me out of the mindset of watching a story about Paris in the 19th century and drew me away from what was happening onstage and within the story at hand. Although I am sure there is an artistic message behind using this image , possibly drawing upon the comparison of these two events, it just did not work for me as it was out of context with the show to that point. That is the double-edged sword with using digital media in theatrical productions, although it allows for many wonderful things, it is sometimes too easy to go too far with a theme that seems good in concept but does not deliver as well in actual practice.

Les Misérables runs at the Media Theatre through January 11, 2015. For more information and tickets visit their website at www.mediatheatre.org or call the box office at 610-891-0100.

Final Thought: Les Misérables at the Media Theatre is a show where one cannot help being swept up in the passion of the music and characters of this show. This production will remind audience just how well this musical can stand the test of time.