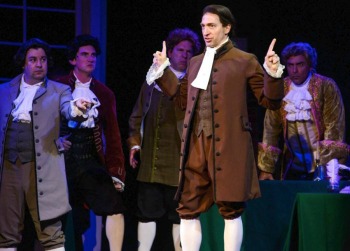 Media Theatre closes its 2015/16 season with 1776. This musical is one of my personal favorites. As a teen it had a profound impact on me and I found myself so fascinated with the people in the show that I read biographies on each of the characters. It was in the spirit of how Hamilton is influencing people today. That being said, Media’s production reminded me of why I love this musical, it not only tells the story of the signing of the Declaration of Independence, but it makes the tale interesting to audiences. Media Theatre’s production of 1776 under the direction of Jennie Eisenhower is clever, and it is a show that will take hold of the audience and teach them something about our Founding Fathers and the signing of the Declaration of Independence.

1776 premiered on Broadway in 1969, and is a musical with music and lyrics by Sherman Edwards and a book by Peter Stone. It tells the story of the events leading up to the American Revolution and the signing of the Declaration of Independence. Although there are a number of liberties taken regarding the historical facts of the events, the musical does paint the general picture of events, and shows that the relationship between the American colonies and the British Crown were strained, and that edicts from Britain, including the Tea Act and Stamp Act, led to incidents of rebellion in the Colonies. 1776 also brings forth the point that it took many hours of debate and compromise to reach a consensus in which Congress signed the actual Declaration. Media’s production of 1776 brings forth these important moments in our American history, and does this in a way that is entertaining and enlightening.

1776 cannot be successful without a strong cast who personify what it was like to endure the conflicts of the 18th century. The entire cast all did a great job at bringing this story to life, and they did it in a way that made it engaging to watch. Ben Dibble as John Adams gives a passionate and profound performance. He was sarcastic when he needed to be, and his vocals were strong especially in “Piddle, Twiddle.” The thing I loved about Dibble’s performance is the moments of the show when others are debating, audiences can see Dibble contemplating and becoming more and more frustrated with the situation. It was in these moments in which I felt Dibble really was John Adams because I could see the frustration and anger rise in him as he is hearing things he did not agree with. Joseph O’Brien plays Thomas Jefferson, and he originally comes across as quiet and reflective. As the show evolves, Jefferson’s personality becomes stronger. O’Brien has a strong voice that really came across in “But, Mr. Adams,” and he also adds humor to the number. John Morrison portrays Benjamin Franklin, and he does this with grace and ease. Franklin is 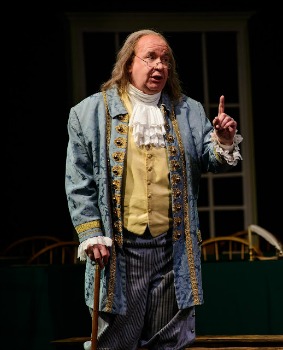 the character in the show that has to be the most likable, and I felt Morrison added moments of levity when it was needed. In addition, Dibble and Morrison have great chemistry onstage, and it made their banter enjoyable throughout the production. As much as I really enjoyed the show, I felt there were two exemplary performances that make this production stand out. The first is Larry Lees as Richard Henry Lee, the aristocrat from Virginia. Lees was perfectly bawdy and energetic, and he shines in his song “The Lees of Old Virginia.” He gave an incredible performance as Lee. Lastly, Luke Brahdt plays Edward Rutledge of South Carolina. This role, is a complex one because he needs to convince people why slavery must be allowed to continue in the South. Brahdt plays this role brilliantly. His rendition of “Molasses to Rum” is incredibly powerful and chill-inducing. I have seen this show performed dozens of times, and Brandt is my favorite in the way he handled this complicated role. Watching his rendition of “Molasses to Rum” is worth the price of admission to the show, and it is a performance I have not stopped talking about since I have seen this show.

Final Thought: 1776 at Media Theatre is a blend of history, music and drama. It provides a looks at an important chapter in our nation’s early history, and it does so in a way that is passionate and entertaining. This cast, under the direction of Jennie Eisenhower, provide zealous performances, and it is well worth seeing if you have an interest in American history or simply if you enjoy an entertaining show within a historical context.