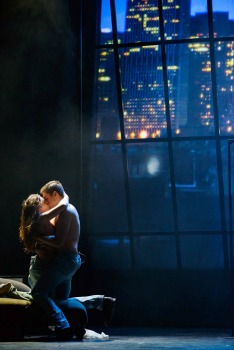 The latest show to grace the stage at the Media Theatre is the musical, Ghost. This show is based on the iconic 1990 movie of the same name, which starred Patrick Swayze and Demi Moore. The plot of the story centers around a love story between Molly and Sam, but Sam is murdered and he is caught between this world and the next. Ghost not only has a beautiful love story, but the production at Media Theatre is full of heart and has outstanding performances.

Ghost opened in London in 2011 and transferred to Broadway in 2012. Bruce Joel Rubin, who wrote the screenplay, also wrote the book for the musical. In addition, the music and lyrics for Ghost are written by Dave Stewart (known as part as the musical duo Eurythmics) and Glen Ballard (known for co-writing and producing Alanis Morssette’s Jagged Little Pill.) Unfortunately, Ghost did not have favorable reviews when it opened. However, the production of Ghost at Media Theatre captures the soul of the storyline and reminds audience members why they loved the story of this classic 90s movie.

The director of Ghost, Jesse Cline, captures the heart of the story and the characters. Cline not only captures the spirit of the iconic show through his direction, but his use of digital media in this production worked to enhance the story. I do not want to give too much away, but one of the best uses of digital media is during death scenes in the show where a spirit is going from one world to the next. With the use of digital media, lights and sounds, these moments from the show encapsulated remarkable moments in the show. My only criticism of the show is that although this show takes places in present day, which is evident with the use of “selfies” and smart phones; there are still references that seem dated to the 1990s. I found that a bit confusing in terms of figuring out what time period the show was set, but this is a minor point.

In the role of Molly is Anna Giordano. Giordano brings the creative aspect of this character to life, and her vocals throughout the show are strong. 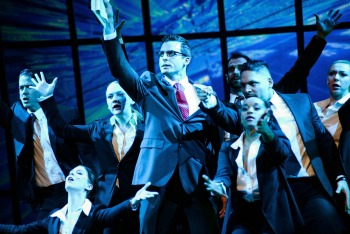 Her songs, “Here Right Now” and “Nothing Stops Another Day” are outstanding. Playing the role of Sam, Molly’s longtime boyfriend, is Zack Krajnyak. Krajnyak does a great job at gaining the audience’s sympathy with his sense of confusion. Sean Thompson stands out in this cast as Sam’s corrupt and drug-addicted friend, Carl. I enjoyed Thompson in this show because he begins this show as a kind and caring friend and as the audience finds out his secrets he becomes (as do his actions) more desperate. In addition, the song at the end of act one, “Suspend My Disbelief/I Had a Life” is powerful. Another standout performance in this production is Tamara Anderson as Oda Mae Brown, the psychic who has “a rap sheet a mile long” related to defrauding people including those who lost loved ones and now learns that she can actually communicate with the dead. Brown gives this role life and pizazz and her vocals are all incredibly strong. I especially enjoyed her performance in “I’m Outta Here.” The role of Oda Mae Brown has to be a larger than life character, and Anderson definitely delivers in this part. Rounding out this cast is JP Dunphy as the explosive Subway Ghost. Dunphy’s performance is energetic and animated, and his performance in the song “Focus” is one of the highlights of this production.

Ghost runs at the Media Theatre through March 29, 2015. For more information and tickets visit their website at www.mediatheatre.org or call the box office at 610-891-0100.

Final Thought: Ghost at Media Theatre is engaging and moving. Director, Jesse Cline, has delved into the heart and soul of the story and its characters. This is what is presented on Media’s Stage. This beautiful love story, along with great performances makes Ghost a charming show.