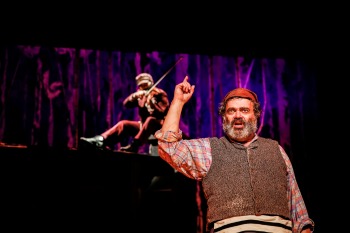 Every time I visit Maine I make sure to visit Maine State Music Theatre to see one of their productions. It is one of my favorite theatres to visit while traveling. This year I was lucky enough to see their beautiful production of Fiddler on the Roof, and the show was incredibly well done and delivered by a stellar cast. This production begins strong with the song "Tradition," which is at the heart of the story in this show. There are many subplots in Fiddler on the Roof revolving around religion, family and love, but at the core, this story is about tradition. As Tevye says at the end of the song “Tradition,” “Without traditions, our lives would be as shaky as a fiddler on the roof!” MSMT's production of Fiddler on the Roof, under the direction and choreography of Gary John LaRosa, reminds audiences of the importance of this touching show, and this cast will touch the hearts of everyone who sees it.

Fiddler on the Roof opened on Broadway in 1964, it was the first show to surpass 3,000 performances, and it was the longest running musical for ten years. The musical is based on Shalom Aleichem’s story, Tevye and his Daughters. Joseph Stein penned the book for the musical, Jerry Bock wrote the music and the lyrics were written by Sheldon Harnick. The 1964 production of Fiddler on the Roof was nominated for ten Tony Awards, and it won nine including Best Musical. The show inspired a movie adaptation in 1971 and numerous revivals. The show is set in the early 1900s in Czarist Russia, and tells the story of Tevye and his wife, Golde, who have five daughters. Tevye and Golde attempt to maintain religious traditions, even though the world around them is changing.

The cast of MSMT’s production of Fiddler on the Roof is strong, and each individual cast member gives an exceptional performance. The role of 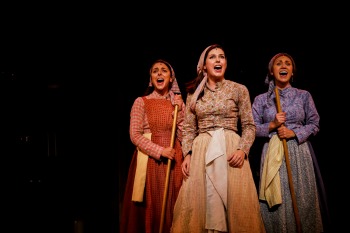 Tevye has to be spirited as well as humorous and he needs to be able to evoke sentiment with the audience. Bill Nolte who plays Tevye does this perfectly, he is strong as soon as he enters with “Tradition,” and he is incredibly energetic with “If I Were a Rich Man.” Tevye’s Wife, Golde, is played by Susan Cella. Golde is a determined and opinionated character, and Cella also gives her a sense of tenderness. As much as I felt Cella and Nolte were engaging when they are onstage with each other, Cella shines in the scenes with the actors who play her daughters. These scenes are full of sentimentality as she is desperate for her daughters to find good husbands. The daughters of Tevye and Golde: Tzeitel (Rachel Rhodes-Devey), Hodel (Siri Howard), Chava (Lexi Rabadi), Sphrintze (Madeleine Vaillancourt) and Bielke (Zoe Dinnerstein) all successfully portray devoted children. Additionally, Rhodes-Devey, Howard and Rabadi are delightful in the song, “Matchmaker, Matchmaker” in which they have powerful vocals and it is one of my favorite numbers in this production. These three fine actors are exceptional in these roles, Rhodes-Devey gives Tzeitel determination and humor, Howard fills Hodel with passion as she is determined to marry someone she loves and Rabadi demonstrates Chava’s strength as she must to choose between two people she loves. Charis Leos portrays Yente, the matchmaker, and she brings this character’s strong personality to life. Leos is animated in this role and she adds levity throughout the show. Motel, the tailor, is played by Aaron Halligan-Stierle. Halligan-Stierle exudes joy and a zest for life when he sings “Miracle of Miracles,” and he is dynamic in this number. Ben Michael plays Perchik, a university student. Michael brilliantly imbues his character with fervor. In addition, his vocal with Rabadi in “Now I Have Everything” is zealous and powerful. 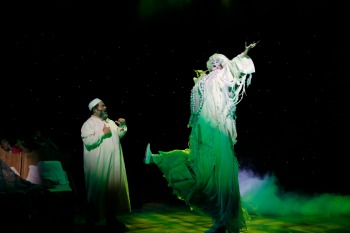 MSMT’s production of Fiddler on the Roof is one of the best productions of this show I have seen. It has an incredible cast that bring tons of energy to their performances. As much as I loved the entire show there are two scenes that really stand out. First, is “The Dream,” which is brilliantly staged and choreographed. It is a highly entertaining number. Also, the end of act one in the scene titled, “Tevye’s Yard,” which is the wedding scene. It begins with the emotional song, “Sunrise, Sunset.” The “Bottle Dance” in this scene is exceptional, and I applaud each one of the Bottle Dancers for their amazing performance and their remarkable poise and balance. Lastly, the scene ends with “Wedding Dance,” which begins with a celebration of the joy of two people who have just been married, and the scene ends with a reminder that the times in Anatevka are precarious, difficult and challenging. I do not want to give the end of act one away, however, this scene was handled with refinement, and it is a reminder of the importance of this musical.

I would be amiss if I did not mention the artistic team behind Fiddler on the Roof. Michael Schweikardt designed the beautiful set. Ashley 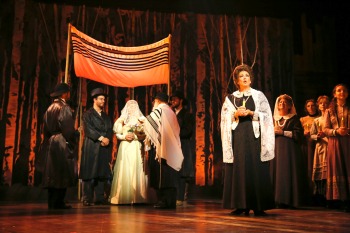 Flowers is the Props Designer. The period appropriate and attractive costumes were designed by Michael Bottari and Ronald Case. Gerard James Kelly is the Wig Designer. Jesse Klug is the Lighting Designer and Nate Putnam is the Sound Designer. Lastly, Brian Cimmet serves as the Music Director.

Fiddler on the Roof runs at Maine State Music Theatre through August 6, 2016. For more information and tickets visit their website at msmt.org or call the box office at 207-725-8769.

Final Thought: Maine State Music Theatre’s production of Fiddler on the Roof is captivating and brilliantly done. It is a show that is full of music that many people are familiar with, and it will also remind audiences of the importance of this musical.