LIBERACE at Walnut Street Theatre is a Grand Show 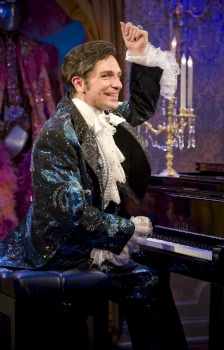 Over the top, flashy and a brilliant piano player – that is what I think of when I think of Liberace.  This is only one aspect of a man who was known as “Mr. Showmanship.”  The play, Liberace!, at Walnut Street Theatre’s Independence Studio on 3 is a play that not only shows the well-known sides of Liberace, but it shows his journey to become “Mr. Showmanship” and his struggles throughout his life. This show is zealous, entertaining and full of heart.

Liberace! is a play that is directed and written by Brent Hazelton.  According to a press release by Walnut Street Theatre, Hazelton’s goal in telling this story was “to reach for something honest, real, balanced, and fundamentally human.” That is exactly what happens in this play. Hazelton goes beyond telling the story of the man who was infamous for glitzy outfits and fame, and reveals a story that many may find unfamiliar. What Hazelton was able to do is make audiences aware that Liberace was more than the man people saw on television or on stage; he was a man who had to overcome obstacles and show the world that he was more than the ostentatious personality people experienced on stage.  Liberace! is an inside look at Liberace, the person, and the events that occurred to make him known as “Mr. Showmanship.” What this show does is make people aware of Liberace and his life, and it will make audiences want to know more about this musical icon.

Jack Forbes Wilson shines as Liberace, and he encompasses all the characteristics of this man to be able to tell his story. What I liked about Wilson’s performance is that even though he brought out all the aspects of Liberace that he is known for, the glitz, glitter, and the big personality; what he highlights is that Liberace was a phenomenally talented pianist. Wilson makes sure this is the highlight of the production as he expertly plays throughout the show. He brings Liberace’s personality to the stage, and this show is like spending two hours watching the highs and lows of Liberace’s life unfold in front of the audience.

Liberace! runs at the Walnut Street Theatre through April 12, 2015. For more information and tickets visit their website at www.walnutstreettheatre.org or call the box office at 215-574-3550. 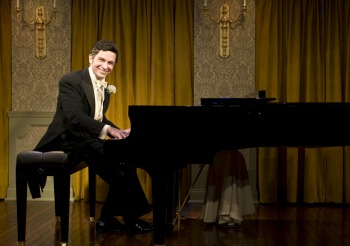 Final Thought: Liberace! at the Walnut Street Theatre is an entertaining production that highlights the highs and lows of his life. Through the incredible performance and piano playing by Jack Forbes Wilson, this show will leave audiences with an understanding of who the man was behind all the glitz of this talented entertainer.