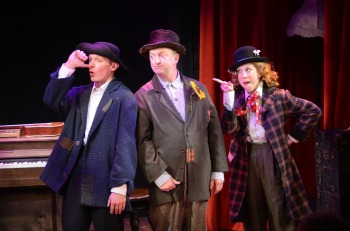 The latest show to grace the stage in the Walnut Street Theatre’s Independence Studio on 3 is I Love a Piano. This show is a celebration of the music of Irving Berlin, as it tells a story of the life’s journey of a piano. This particular piano was made in “Alexander’s Music Shop” in 1910, and journeys through time as it is used in a speakeasy, a movie theatre and a Canteen during World War II. This show is a true delight, as the cast wonderfully entertains audiences with a wide variety of Berlin’s music that celebrates Berlin’s monumental career.

Irving Berlin is considered one of the greatest songwriters in American history. I Love a Piano is a fitting tribute to this songwriter as it celebrates Berlin’s most beloved songs. Berlin is known for writing such well-known songs such as “God Bless America,” “Puttin’ on the Ritz” and “White Christmas.”  Berlin had the ability to capture the soul of America in his music and reach the hearts of Americans. The creators of I Love a Piano, Ray Roderick and Michael Berkeley have created a revue of songs held together by a single thread, the journey of a piano. This show is creative, and it will make audiences tap their feet, and relax as they hear well-known Berlin songs as well as some little known gems.

Under the direction and choreography of Ellie Mooney, I Love a Piano, skillfully uses a cast of two men and two women to form couples whose 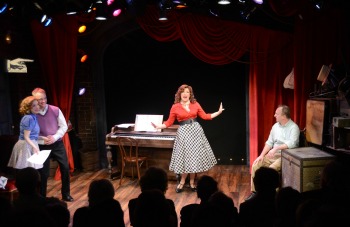 interactions invite the sentiment of the songs to come forth. Ellie Mooney, Own Pelesh, Denise Whelan and Scott Langton all have incredible energy and talent, and are able to glide from one scene to the next with ease. This show has over sixty of Berlin’s songs, and each one I enjoyed for different reasons, but for the sake of brevity I will mention a few of the highlights.  In the first act, Whelan and Mooney shine in the song, “Snooky Ookums.” Pelesh is also strong in “Pack Up Your Sins and Go to the Devil.”  The number in the first act, “Silent Movie” is playfully animated, creative and entertaining. Whelan provides strong vocals throughout the show, and her renditions of “Say It Isn’t So” and “Suppertime” are beautifully performed. Whelan has the gift of infusing the audience with her raw emotion, and these songs pull at the heart strings of the audience. Mooney‘s performance is a pleasure to experience she is joyfully spirited and animated in her performance, and she and Langdon are full of dynamism in “We’re a Couple of Swells.” The scenes in the show depicting World War II are sentimental, and “White Christmas” is touchingly sung by Pelesh, and “Count Your Blessing” is equally moving as performed by Langdon. In act two, there is a scene that depicts an audition for the title role in Annie Get Your Gun at a Summer Stock Theatre. This whole scene is brilliant, and the blend of music and comedy is highly entertaining. The entire cast of this production is incredible, as they poignantly tell the story of America’s history through a span of forty years through the “eyes” of a piano and Berlin’s music.

The artistic team also deserves recognition for this production. Roman Tatrowicz designed the detailed set. Julia Poiesz designed the wonderful costumes. Christopher Colucci is the Soung Designer and Ryan O’Gara is the Lighting Designer. The Musical and Vocal Director is David Jenkins.

Final Thought: I Love a Piano is an evening of memorable songs and delightful music. A dynamic cast energetically and entertainingly present the songs of Irving Berlin. This is a show that will remind audience of the brilliance of Berlin’s music and will evoke emotions in this wonderfully crafted production.