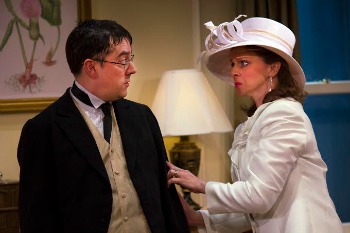 The newest comedy to open at Act II Playhouse is Neil Simon’s Hotel Suite. The show revolves around two unique story lines that provide a humorous glimpse into the lives of two separate couples that happened to stay in the same hotel suite. The show provides lots of laughs, but it also engages the audience in the storylines of each couple.  Act II’s production of Hotel Suite is a great way to spend an evening out and have a few laughs with friends and family.

Hotel Suite is a collection of scenes from Neil Simon’s “Suite” titles – Plaza Suite, California Suite and London Suite.  I enjoyed the first act in which audiences are introduced to two couples in different comical situations, and the common thread is that the setting is in the same hotel suite in Beverly Hills. The second act of this comedy seemed a bit disjointed to me because although it is a continuation of the stories of the couples in act one, there is no ultimate resolution linking these two story lines together. During act two, one couple is in a hotel in London and the other at the Plaza hotel in New York.  However, even though I felt the script during the second half of the show came across as somewhat fragmented the performances from the four actors were lively and hilarious.

Director Matt Silva has assembled a very energetic cast who will definitely make audiences laugh. The first couple, Diana Nichols and Sidney are 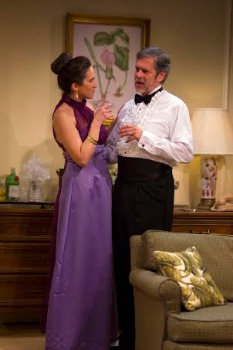 played by Karen Peakes and Leonard C. Haas. Diana Nichols is a British actress who, in the first act, is in California to attend the Academy Awards because she was nominated for Best Actress. Peakes is sensational in this role and brings a frenetic charm and charisma to her character. Haas plays Diana’s husband, and he brings a quick wit and reserved air to his role as Sidney. These two actors complement each other very well on stage and bring the audience laughter as well as an emotional investment in the characters’ relationship. Tony Braithwaite and Tracie Higgins play the roles of Marvin and Millie Hubley, a married couple who have problems to deal with. Personally, I always enjoy Braithwaite on stage because he is always animated, and makes the audience laugh hysterically. Braithwaite does not disappoint in this role as he thrives in Martin’s shenanigans.  Higgins successfully matches Braithwaite’s energy, playing his wife, Millie. She also shines through with her own comedic flare and timing to maintain a wonderful banter between these somewhat off center characters. Fans of Neil Simon’s comedies are sure to enjoy Hotel Suite and the performances will have audiences laughing throughout the show.

Final Thought: This is a great show to go to with family and friends; it will make audiences laugh. The performances from the cast: Tony Braithwaite, Tracie Higgins, Karen Peakes and Leonard C. Haas are outstanding and are sure to keep you laughing through the entire show.