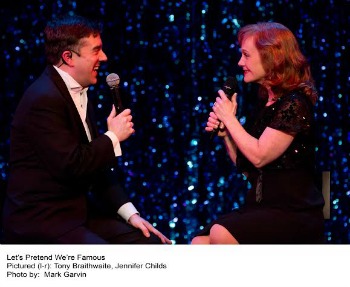 Currently on the stage at Act II Playhouse is the hilarious Let’s Pretend We’re Famous.  This show stars two phenomenally talented actors, Tony Braithwaite and Jennifer Childs. The show encompasses humor, song, dance, and even some historical tidbits. This show will have audiences laughing throughout the show, and Braithwaite and Childs’s performances are not to be missed.

During the last 13 years, Braithwaite and Childs have collaborated on numerous projects. Let’s Pretend We’re Famous was originally produced in 2012 at 1812 Productions as part of the Independence Foundations New Works Initiatives.  Braithwaite and Childs not only star in this show, but they also wrote the show. The show celebrates those who are famous and explores the rewards and drawbacks of being a celebrity.  The show uses musical numbers, improv, and comedy skits to examine what it is like to be famous.

Braithwaite and Childs are charming together in Let’s Pretend We’re Famous. 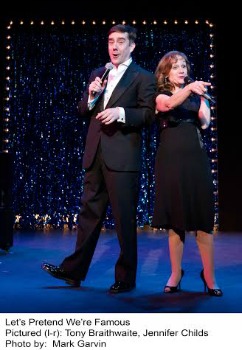 They are both flawless in the improv aspects of the show. In addition, the musical numbers in this production are strong and delightful. The chemistry between these two multi-talented actors is a pleasure to watch, and their performance in this show is outstanding. Childs and Braithwaite are hilarious in Let’s Pretend We’re Famous, and they also delight audiences throughout the show with their vocals. Additionally, I need to mention one more person involved in this production and that is the pianist, Owen Robbins. Robbins provides phenomenal musical accompaniment throughout the show, and he adds additional historical knowledge during the production.

Final Thought: Do not miss this opportunity to see Tony Braithwaite and Jennifer Child’s in the delightful comedy about being a celebrity. They are a charming pair who will have you laughing and their musical numbers are sensational.