Hello, Dolly! at Media Theatre is Light-Hearted Entertainment Just in Time for Spring 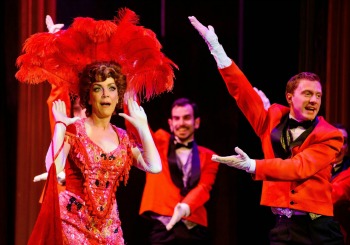 The Media Theatre closes its 2014-15 season with the treasured Hello, Dolly! This is one of those musicals that will leave audiences in better spirits than when they first walked into the theatre. This show is a musical about Dolly Levi, who is a “meddler,” matchmaker and simply a person who loves life. Hello, Dolly! at the Media Theatre is a production that not only has a solid score, but a cast that will enchant audiences as they perform this classic musical.

Hello, Dolly! takes place in New York in the 1890s. The story revolves around Horace Vandergelder, the wealthy owner of a hay and feed store, as he hires matchmaker, Dolly Levi, to find him a wife. Dolly does not rest until every single person tied to Horace is married or in a relationship including Vandergelder’s niece, his clerks, Cornelius and Barnaby, and two shop girls, Irene Molloy and Minnie Fay. She even has a plan to find a match for herself.  The musical is based on Thorton Wilder’s play, The Matchmaker. The music and lyrics for this show are by Jerry Herman and Michael Stewart wrote the book for the show. Hello, Dolly! is a show that has memorable music that is well known, and this production is dazzling. 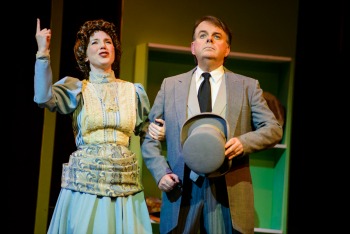 definitely delivers. She makes a grand entrance as the larger than life Dolly, and handles the challenges of the role with exuberance.  McArdles especially sparkles in the number “Before the Parade Passes By,” where she grabs the audience’s attention with her passion for this role. However, as much as McArdle is commanding as Dolly, her costars also shine just as brightly with their scene-stealing performances. Kelly Briggs plays Horace Vandergelder, the cranky and successful business owner who seeks a wife. Briggs is outstanding in this role as he gives his character a perfect balance of gruff and warm heartedness. Playing Vandergelder’s two clerks are Patrick Lundt as Cornelius and Cameron Scot Slusser as Barnaby. Lundt and Slusser work well together and their antics have audiences laughing through many scenes of the show. In addition, Lundt’s song, “It Only Takes a Moment” is strong vocally and touches the hearts of the audience members. Elisa Matthews and Madalyn St. John portray the roles of Irene Malloy and Minnie Fay. Matthews is kindhearted as Irene and St. John is overflowing with energy as Minnie Fay. I need to mention, that the beginning of act two begins with the song, “Elegance,” and this song highlights these four performers, Lundt, Slusser, Matthews and St. John, and they give this song charm and grace. 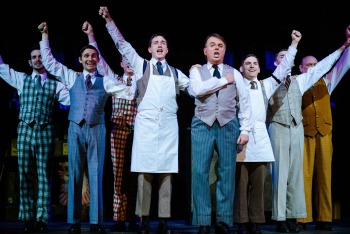 The director and choreographer of this production of Hello, Dolly! is Dann Dunn. The choreography in this production is stunning. There are two numbers that stand out in this show. The first, “The Waiters Gallop” is infused with energy. The members of the ensemble are delightful to watch in this number. Additionally, the song, “Hello, Dolly” is a show stopping number. With amazing vocals and brilliant choreography this number will mesmerize audiences. Media’s production of Hello, Dolly! is a show that is sure to please audiences.

Hello, Dolly! runs at the Media Theatre through May 24, 2015. For more information and tickets visit the theatre’s website at www.mediatheatre.org or call the box office at 610-891-0100.

Final Thought: Hello, Dolly! at Media Theatre is filled with wonderful music and incredible performances. If you are looking for a cheerful show to ring in the spring, this production should be on your list.