HELLO, DOLLY! at EPAC is an Exhilarating Production 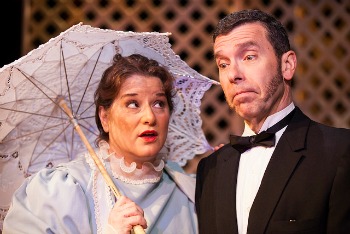 The spring musicals at Ephrata Performing Arts Center are always shows I look forward to seeing because they tend to be strong productions in which the passion and energy of all involved with the show shine through. Hello, Dolly! is no exception to this. EPAC’s production of Hello, Dolly! will leave audiences with a smile on their face and in better spirits than when they first walked into the theatre.  Under the direction of Edward R. Fernandez, Hello, Dolly! is energetic, uplifting and full of top notch performances.

Hello, Dolly! takes place in New York in the 1890s. The story revolves around Horace Vandergelder, the wealthy owner of a hay and feed store, as he hires matchmaker, Dolly Levi, to find him a wife. Dolly is a “meddler,” matchmaker and simply a person who loves life.  She does not rest until every single person tied to Horace is married or in a relationship including Vandergelder’s niece, his clerks, Cornelius and Barnaby, and two shop girls, Irene Molloy and Minnie Fay. She even has a plan to find a match for herself.  The musical is based on Thorton Wilder’s play, The Matchmaker. The music and lyrics for this show are by Jerry Herman and Michael Stewart wrote the book. Hello, Dolly! is a show with well-known and beloved music, and this dazzling production will delight audiences.

Playing the role of Dolly Levi is Tricia Corcoran. What I loved about Corcoran’s performance is that she made this role her own. She portrays a character who is full of personality with grace, and her entrance in the number “Hello, Dolly” was charming. Her best number was “Before the Parade Passes By” and it was not only vocally strong, but it was powerful to watch as she got to the heart of the song and brought out the deep felt emotions that are conveyed in the lyrics of this number. Bruce Weaver plays Horace Vandergelder, the cranky and successful business owner who seeks a wife. Weaver is wonderful in this role as he is perfectly irritable. Also, the dynamic between Corcoran and Weaver is strong, and I enjoyed their scenes together throughout the show. As much as I enjoyed Corcoran and Weaver, who gave outstanding performances, this 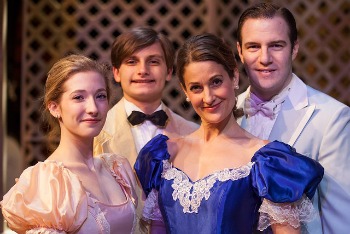 particular production also has four amazing performances by four actors who fill their roles with heart and liveliness. The first two I need to acknowledge are Vandergelder’s two clerks Cornelius Hackl, played by Nick Smith, and Barnaby Tucker, portrayed by Dylan Caligiuri. Smith and Caligiuri work well together and their antics have audiences laughing throughout many scenes of the show. I particularly appreciated how Smith and Caligiuri play well off each other. In addition, Smith’s song “It Only Takes a Moment” is strong vocally and touches the hearts of the audience members. The next two actors who brought a great deal of passion to their roles are Stacia Smith as Iris Molloy and Jennifer Amentt as Minnie Fay. Smith’s rendition of “Ribbons Down My Back,” was a moving moment in the production and one of the strongest vocals in the show. Amentt’s performance as Minnie Fay is overflowing with energy. I need to mention, that the beginning of act two begins with the song, “Elegance,” and this song highlights the talents of these four fine performers, and they imbued this song with charisma. Lastly, I want to mention the remarkable choreography for this production created by Buddy Reeder. The choreography in this production is stunning. There is a number that I found to be a stand out in this show, “The Waiters Gallop.” The song is infused with energy, and the members of the ensemble are delightful to watch in this number.

The set for the production designed by Jorden Janota really worked for the production. In particular, I thought the letter “D” embraced in a heart in the middle of the stage added to the overall appeal of the set. Shelby Lionella designed the stunning costumes. Jeff Pettyjohn is the Sound Designer and Jeff Cusano and Michael Wiltraut are the Lighting Designers. In addition, Zach Smith is the Music Director.

Hello, Dolly! runs at Ephrata Performing Arts Center through May 14, 2016. For more information and tickets visit their website at www.ephrataperformingartscenter.com or call the box office at 717-733-7966.

Final Thought: Hello, Dolly! at Ephrata Performing Arts Center is a show that has an incredible cast and wonderful musical numbers. The production is an outstanding musical, and one that audiences will adore.