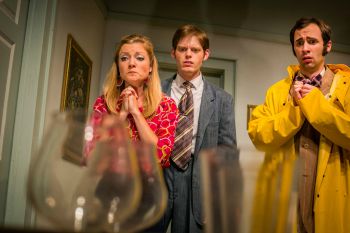 The latest show to grace the stage at Hedgerow Theatre is the British farce, No Sex Please, We’re British. This play by Alistair Foot and Anthony Marriott is about a newly married couple, Francis and Peter Hunter who live above a sub-branch of the United National Bank in Royal Windsor, England where Peter is the assistant manager. Francis innocently sends in a mail order for Scandinavian glassware, but instead receives Scandinavian pornography. The show revolves around the antics involved in dealing with the pornography while hiding the knowledge of these items from Peter’s visiting mother, his boss, the bank inspector and a kindly police superintendent.  What ensues is a show full of slamming doors and comical performances.

The issue I had with this play mostly has to do with that it relies on jokes based on sexual innuendo and social taboos that may have been racy when the play was written in the 1970s, but today they are a bit out of date. The script of No Sex Please, We’re British is flimsy and did not carry the humor and edginess it once did in the 70s. That being said, director Damon Bonetti and the cast do the best they can with this farce.

The newly married couple, Francis and Peter are played by Carl Nathaniel Smith and Meredith Beck. Both these actors are full of energy, and they work well together and handle their role with ease. The biggest scene stealer in this show is Mark Swift as Brian Runnicles. He effortlessly and humorously plays this awkward and well-meaning friend. Susan Wefel brashly portrays Peter’s mother, Eleanor Hunter. Another stand out performance comes from Brock D. Vickers who plays Paul, the affable police superintendent. Vickers has a commanding presence and a firm voice, and I enjoyed his performance in this role.

No Sex Please, We’re British runs at Hedgerow Theatre Company through August 23, 2015. For more information and tickets visit their website at www.hedgerowtheatre.org or call their box office at 610-565-4211.

Final Thought: No Sex Please, We’re British is a show that is entertaining and humorous. Despite the play seeming dated, it is a show full of energetic performances.