Have a Shockingly Good Time at Philadelphia Theatre Company’s BASKERVILLE 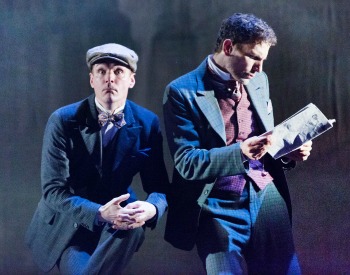 There have been many adaptations ranging from stage to film of Sir Arthur Conan Doyle’s most famous mystery, The Hound of the Baskervilles. Plenty of mystery surrounds this well-known tale as Sherlock Holmes and Dr. Watson investigate the legend of a supernatural hound. This story is the premise of Ken Ludwig’s Baskerville: A Sherlock Holmes Mystery. Baskerville, under the direction of Amanda Dehnert, stays true to what people love about Sir Doyle’s classic tale and introduces elements that make it a bit of a madcap take on the story. It brings to mind similarities to that of the play The 39 Steps. Playwright, Ken Ludwig’s (Lend Me a Tenor, Crazy for You,) adaptation of Doyle’s novel, BASKERVILLE, is remarkably entertaining, and currently onstage at Philadelphia Theatre Company.

In case you are not familiar with the story of The Hound of the Baskervilles, it is a mystery that begins with the mysterious death of Charles Baskerville who was found dead in his ancestral home. Sherlock Holmes and Dr. Watson are engaged to protect young Sir Henry Baskerville, Charles’s closest heir, from the family curse - a gigantic Hound that strikes down members of the Baskerville family. Ludwig puts his own spin on this classic story, which makes it a fast paced and enjoyable production. In addition, the various residents of the moors that Holmes and Watson encounter are played by a trio of actors (often playing numerous roles), and this adds to the humor of the show.

Baskerville is witty, and will definitely have audiences laughing. However, I felt act one dragged a bit in setting up the story compared to Ludwig’s 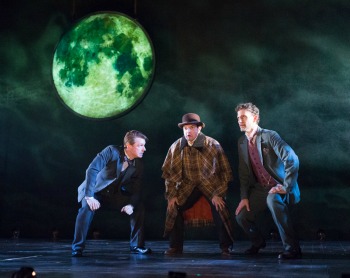 other shows. That being said I felt the actors playing the roles of Sherlock and Doctor Watson were outstanding. Playing the role of Sherlock Holmes is Ron Menzel. Menzel is a perfect combination of arrogant and amusing, which makes him more relatable and likable. Henry Clarke portrays Doctor Watson who comes across as personable and intelligent. Menzel and Clarke work well together onstage, and these two are perfectly cast in these roles. Matt Zambrano plays Sir Henry Baskerville along with a variety of other characters. Zambrano is boisterous in this role, as he play an American from Texas who is heir to the Baskerville estate. Adam Green portrays Stapleton among other characters. Green’s performance as Stapleton, a naturalist who collects butterflies, is animated and his scenes as Stapleton in which he is chasing butterflies are hysterical. Rounding out this cast is Crystal Finn who plays numerous roles, and she stands out in her scenes as Miss Beryl Stapleton, the innocent and kind sister of Stapleton. What this production of Baskerville reminded me was that the stories of Sherlock Holmes are still engaging a century after the original story was written. 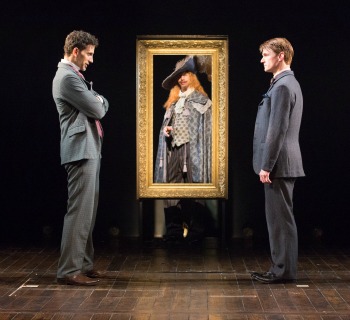 The design team deserves huge acclaim for creating a very dynamic set, designed by Daniel Ostling, which brings life to the show. In particular with the set I enjoyed the trap doors and elevators in the floor and the “Upsy-Daisy” flowers. The Lighting Designers are Philip S. Rosenberg and Joel Shier and the Sound Design is by Joshua Horvath. In addition, Jess Goldstein designed the wonderful costumes.

Baskerville: A Sherlock Holmes Mystery runs at the Philadelphia Theatre Company through December 27, 2015. For more information and tickets visit their website at www.philadelphiatheatrecompany.org or call the box office at 215-985-0420.

Final Thought: Baskerville: A Sherlock Holmes Mystery at Philadelphia Theatre Company is a fun and witty production that is simply entertaining. This play combines the mystery of Sir Conan Doyle’s novel with the humor of Ludwig’s writing, and it provides for an entertaining night of theatre.