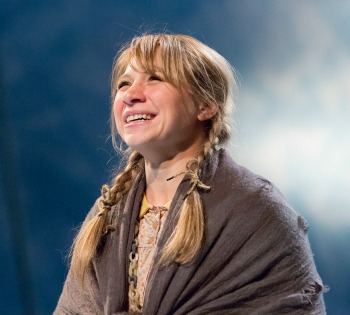 The Arden Children’s Theatre presents the world premiere of Hans Brinker and the Silver Skates under the direction of Whit MacLaughlin. This story was written by Mary Mapes Dodge in 1865, and the story was adapted for the stage at the Arden by Laura Eason. The play is the perfect show for families as adults and children will be immersed in the story of the Brinker family, and how the children in this family, Hans and Gretel refuse to give up hope despite their dire circumstances. This production of Hans Brinker and the Silver Skates is a wonderfully staged play in which the audience becomes immersed in the story throughout the show.

Hans Brinker and the Silver Skates takes place in 19th century Holland. As soon as people enter the theatre they will be transported to Holland and simpler times. The set, designed by David P. Gordon, is stunning. As members of the audience enter the theatre they are greeted by a stage that has several operational windmills, and a stage that looks like a frozen canal in Holland. This set assists in telling the story of Hans and Gretel Brinker as skating on the frozen canal is part of their daily life. Hans Brinker and the Silver Skates is a story about two siblings, Hans and Gretel Brinker. They come from a poor family, but they are honorable children who dream of a better life. This heartwarming tale centers around a race on the canals through which the winner of the race will win a pair of silver skates. Gretel dreams of having these silver skates. The play focuses on family, friendship and taking time to understand someone else’s plight. Hans Brinker and the Silver Skates is an exquisite production for families, and it is a show that is perfectly heartwarming.

Playing the role of Hans Brinker is Brian Ratcliffe. Ratcliffe is exceptional as he plays a loving and protective older brother. His scenes with 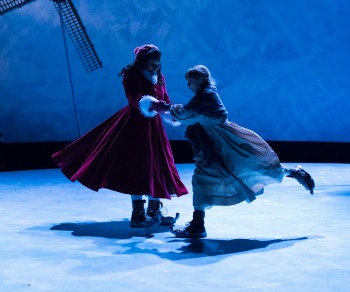 Lauren Hirte who plays Gretel are strong, as these two work well together onstage. Hirte gives a strong performance that brings out her character’s innocence. In addition, there is a scene that illustrates Gretel’s dream of owning a proper coat. This is a wonderful part of the play that is brilliantly performed and incredibly staged. Rachel Camp plays dual roles, of Dame Brinker as well as Katrinka Vos. Camp is strong in both these roles as she gives a sense of compassion and concern as the mother. Also, she successfully depicts the insolent Katrinka Vos and the temper tantrums she throws as perfectly temperamental.  Ed Swidey plays the father, Raff Brinker, as well as the announcer for the skating race. Swidey is humorous and spirited as the announcer, and creates a sense of warmth as the father. Ciji Prosser portrays Heidi von Gleck, a girl who is well off, but she also shows compassion towards Hans and Gretel. Prosser is superb in this role, as she evolves from a person inclined toward judging others easily to someone who attempts to understand others plight in life. There is a skating scene between Prosser and Hirte who plays Gretel that is beautifully done, and depicts the blossoming friendship between these two characters. Matteo Scammell successfully plays several roles in the show, and he is charming as Peter von Holp. Steven A. Wright also plays two characters in the production, and he gives an excellent performance as Doctor Boekman. In addition, I want to mention Jay Ansill who is the composer/musician for this show. The music is outstanding in this show, and Ansill provides the lovely accompaniment.

Hans Brinker and the Silver Skates runs at the Arden Theatre Company through January 31, 2016. For more information and tickets visit their website at www.ardentheatre.org or call the box office at 215-922-1122.

Final Thought: The Arden’s Children Series is a great way to introduce children to live theatre. Hans Brinker and the Silver Skates is a great show for families, and children and adults will enjoy this heartwarming story about friendship, family and kindness.