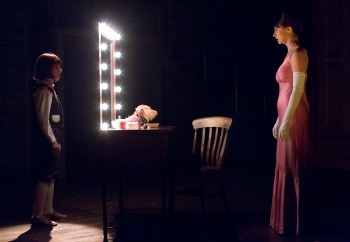 I have written previously about how the shows at the Arden Theatre Company are a treat because they tend to be unique and different, and this theatre always puts their own spin on shows, even classic musicals. The production of Gypsy at the Arden is no exception. Director. Terrence J. Nolen has taken a show everyone knows and loves and put his own unique take on it. The show has enough originality that it makes it seem fresh and new, without taking away the parts that makes Gypsy iconic. This production at the Arden is spectacular, and one of those productions that is memorable for the performances as well as the creative staging. To date, this is the best production of Gypsy I have seen.

The musical Gypsy is based on the memoirs of Gypsy Rose Lee, and the story revolves around her mother, Rose, and Rose’s two daughters, June and Louise. Jule Styne wrote the music for Gypsy, and Stephen Sondheim penned the lyrics. The original Broadway production opened on May 21, 1959 at The Broadway Theatre. The original production starred Ethel Merman, Jack Klugman and Sandra Church. “Gypsy” has seen several Broadway revivals starring well-recognized names such as Angela Lansbury, Tyne Daly, Linda Lavin, Bernadette Peters and Patti LuPone. Gypsy tells the story of Rose, a domineering stage mother, who desires to make at least one of her daughters a successful star of the stage. This musical has moments of heartbreak and moments of laughter.  Gypsy takes the audience on an adventure following Rose and her daughters through the hard life of show business.

Mary Martello plays the iconic role of Rose, the mother who desperately wants to have one of her children be a star. Martello’s performance in 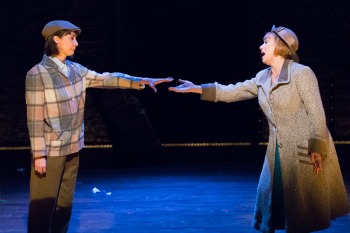 this role is one of my favorite I have seen her in. She brings out the desperation of her dream to have one of her children be a star, and she does this without being over the top. In the number, “Rose’s Turn,” Martello depicts Rose’s raw emotion and shows her unraveling. Martello is outstanding throughout the show, however, this particular song is incredible to watch. Playing Herbie is Anthony Heald. Heald makes Herbie charming and likable. The love Herbie has for Rose is evident throughout the show, and that moment when he realizes Rose is never going to leave show business is heart breaking to watch. Heald makes the audience feel for him and they feel his heartbreak. Caroline Dooner portrays Louise, the daughter who always takes second place to her sister, and who eventually becomes Gypsy Rose Lee. Dooner brings out the naiveté of Louise, and she is strong throughout the show. Dooner gives a strong performance vocally, especially in the song “Little Lamb.” In addition, what makes Dooner’s performance exceptional is the unique way audiences see her react to others on stage. For example, as Rose is singing, “Everything is Coming Up Roses,” Louise’s look of horror on her face is absolute perfection. What makes Dooner’s performance stand out is the way she reacts to others onstage, he facial expressions throughout the show speak a thousand words, and makes this a stand out performance. Rachel Camp plays Dainty June, the daughter who Rose is convinced will be a star. Camp is bubbly in the role without being over the top. Her song with Dooner, “If Mama was Married,” is full of energy and it is a great duet between these two actors. Malik Akil portrays Tulsa, one of the ”boys” that performs in the traveling act with Baby June. Akil gives a magnificent performance in the number “All I Need is the Girl.” This number at the end of act one has incredible energy and the dancing in this song is exceptional. There are so many great performances in this show, but I do not have the room to write about every single one. However, the last group of people I need to mention are the three burlesque performers, Joilet Harris, Monica Horan and Meghan Strange, who perform “You Gotta Get a Gimmick.” These three are animated and had audiences cheering and laughing, and these three fine actors well deserve the applause.

In addition to all the incredible performances I also need to mention the artistic team. James Krozner designed the elegant set. Jenn Rose choreographed the energetic dance numbers. Richard St. Clair designed all the wonderful costumes from Gypsy Rose Lee’s gowns to the cow costume. Thom Weaver is the Lighting Designer and Jorge Cousineau is the Video and Sound Designer. Ryan Touhey serves as the Music Director. In addition, Alec E. Ferrell is the Stage Manager.

Gypsy runs at the Arden Theatre through June 25, 2017. For more information and tickets visit their website at www.ardentheatre.org or call the box office at 215-922-1122.