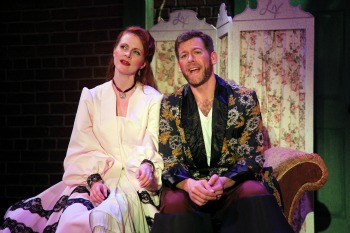 Kiss Me, Kate, the Broadway classic opened last week at the Gretna Playhouse. This production dazzles audiences with its strong dancing and singing. It will have audience members tapping their feet with its memorable score as well as being entertained by the stories of the characters in the show.

The classic musical, Kiss Me, Kate, is a story about a production of William Shakespeare’s Taming of the Shrew, and the relationships and drama that occur between the actors on and off stage. Cole Porter wrote the music and lyrics for this show, and it was the only musical of Porter’s to run for more than 1,000 performances.  Sam and Bella Spewack wrote the book for this show. The original Broadway production of Kiss Me, Kate opened in December of 1948. In addition, in 1949 it won the first Tony Award presented for Best Musical. Dennis Courtney directs this latest production at the Gretna Theatre and audiences will be delighted by this show.

Many of the actors in the show were outstanding and many of the vocals were superb as well. Jill Van Velzer plays Lilli Vanessi who is a star and the ex-wife of Fred Graham played by Allan Snyder. Van Velzer and Snyder add the necessary chemistry to their characters, which make their solos divine. Their duet “Wunderbar” is exceptional, as is Van Velxer’s solo, “So in Love.” Christie Dabreau portrays Lois Lane, and her solos in “Tom, Dick or Harry” and “Always True to You in My Fashion” are exquisite. Her solos were some of the best in the show. Bill Calhoun is portrayed by Thaddeus Pearson and his duet with Debreau, “Why Can’t You Behave” is excellent. In addition, one of the most spectacular numbers of the show is “Too Darn Hot.” Kolby Kindle plays Paul, and his solo and dancing in the number is sensational. The singing and dancing in the number is worth the price of admission. One last person who needs mentioning is the actor who plays General Harrison Howell, Jay Poff. Poff’s solo, “From This Moment On” is excellent and powerful. The entire cast of this show is fantastic, and anyone who is an admirer of Porter’s music or a fan of this show, should not miss this wonderful production of Kiss Me, Kate.

The creative team for Kiss Me, Kate also deserves recognition. The scenic designer is Kyle Dixon. Janell Berté and Beth Dunkelberger are the costume designers who created the beautiful costumes for this production. In addition, Louis F. Goldberg serves as the musical director.