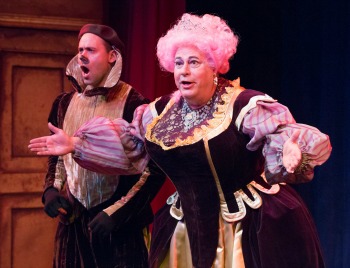 Every year People’s Light produces a musical panto, it is a holiday tradition, and each time there is a new tale that is told in the tradition of the panto. This year’s panto is, The Three Musketeers (The Later Years.) The holiday panto at People’s Light is a show I look forward to every year. This production introduces twists on the story of The Three Musketeers, and the result is a highly energetic show that is perfect for the entire family.

For those not familiar with a panto, it is a British tradition during the holiday season. A panto retells a well-known story or fairy tale and turns in on its ear. According to People’s Light, “These familiar stories form the basis for exaggeration, variation and topical social commentary, as well as outrageous jokes, humorous songs, sprightly dances and, sometimes, a strangely affecting love story.” The Three Musketeers (The Later Years): A Musical Panto is a great way to introduce children to live theatre, and the adults will love the show as well with its wit and entertaining music.

The Three Musketeers (The Later Years) under the direction of Pete Pryor is the twelfth panto at People’s Light. This year’s panto is written by Kathryn Peterson with music and lyrics by Michael Ogborn. The plot is a retelling of the classic adventure story by Alexandre Dumas, which takes place in seventeenth century France. In the traditional panto style this show is complete with slapstick, witty humor and audience participation.

What I love about the cast of these productions is that they all seem to have as much fun doing the show as the audience has watching it. This 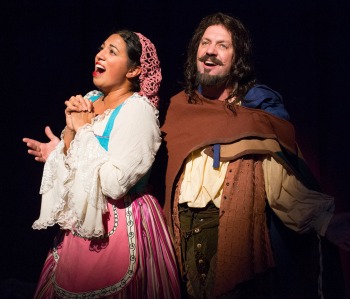 particular cast is full of energy and enthusiasm, and it was a delight to see this production come to life on stage. The musketeers, Athos (Owen Pelesh), Aramis (Tom Teti), Porthos (Brad DePlance) and D’Artagnan (Robert Smythe), were exuberant. They each added a sense of wit to the show. It was a pleasure seeing Mark Lazar as Queen Agnes of Malvaria. Lazar is a strong presence onstage, and he is full of personality in this role. Playing King Hughy, who is presented as a manipulated monarch, is Tabitha Allen. Allen is animated in her scenes. Dito Van Reigersberg plays Horace the Hound, a loyal sidekick of King Hughy. Van Reigersberg begins the show as narrator, and he adds heart to this show. There is a song about loyalty in act one that he performs, and it was one of the strongest numbers in the show. Colette, a barmaid and D’Artagnan’s fiancée, is played by Meera Mohan. She has incredibly strong vocals throughout the show, and she brings out the kindness of Colette. Playing Henrietta the Chicken is Leah Walton. Walton is spirited as she demonstrates this character’s determination.  Pete Pryor plays the villain, Lord Guido Mazarotti, the Royal Falconer. Pryor is perfectly villainous in this role. Lord Guido’s loyal followers, his trusty falcons, are played by Laura Giknis, Marissa Barnathan, Susan McKey, and Katie Johantgen. This nefarious band of aviary evil energetically and animatedly draw their talons against the heroes of the story. 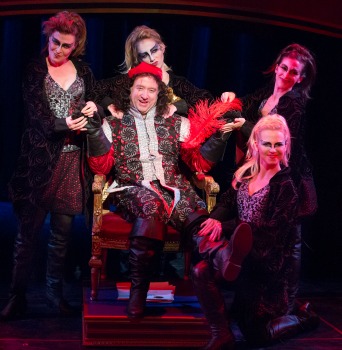 As much as I enjoyed the show as a whole, there are a couple scenes that I thought were exceptional. First, the scene with Pelesh and DePlance are uproariously funny in a slapstick scene where they make a “banana split.” The other scene is the incredibly well done and remarkably choreographed fight scene by Samantha Reading. The scene is dazzling and it is accomplished utilizing puppetry and black light, and it is one of my favorite things I have experienced in a panto over the years.

The Three Musketeers (The Later Years): A Musical Panto runs at People’s Light through January 10, 2016. For more information and tickets visit their website at peopleslight.org or call their box office at 610-644-3500.

Final Thought: The Three Musketeers (The Later Years): A Musical Panto at People’s Light retells this classic tale of adventure, and audiences will love the twists and turns of this show. Do not miss the chance to see this humorous and highly entertaining show with its outstanding and energetic cast that is sure to put you in a good mood for the Holiday Season.