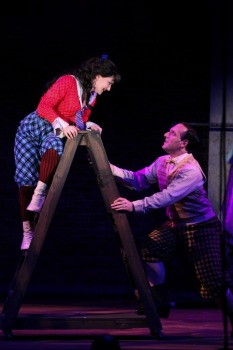 Funny Girl at Dutch Apple Dinner Theatre is a show that is exactly what is should be – a show with dynamic performances, dazzling sets, beautiful costumes and a score that will have audiences humming for days. It is one of those shows that are rarely performed onstage because people tend to compare the lead to the performance of Barbara Streisand who played the iconic role of Fanny Brice in both the 1964 Broadway production and the 1968 film. However, Funny Girl at Dutch Apple sets the bar high in this production, and the cast is remarkable in how they make their roles unique. Funny Girl at Dutch Apple is a show that impresses and entertains audiences and it is a thoroughly enjoyable night out.

Funny Girl is a musical based on the life of Fanny Brice who was a famous theatre and film actor and comedian during the early twentieth century. Brice dreams of being on a Broadway stage even though her peers deemed her not attractive enough. This musical is about Fanny’s journey to stardom, and against the odds, she becomes one of the most famous names in show business. Along the way, she meets and falls in love with the dashing Nick Arnstein. The book for Funny Girl was written by Isobel Lennart, music by Jule Styne and lyrics by Bob Merrill.

The production of Funny Girl at Dutch Apple, under the direction of Brian Enzman, is a show with a lot of charm. As mentioned previously the difficulty presented in performing this show is that so many people associate the lead role with Barbara Streisand’s performance. Anna Baker plays the role of Fanny Brice, and she gives a powerful performance as the brash and charismatic Fanny. Baker makes this role her own, and she expresses the effervescence of this character. Besides giving an exquisite performance, Baker can belt a tune. She powerfully sings iconic songs such as “Don’t Rain on My Parade” and “I’m the Greatest Star” with ease. Once audiences see Baker they will immediately be enthralled with her charisma in this role. Equally as charming is Galloway Stevens as Nick Arnstein. Stevens and Baker have a sweet chemistry onstage. Stevens‘s performances are equally as strong as Baker‘s, and his vocals in “Nick’s Parade” are powerful and passionate. Playing Mrs. Brice, Fanny’s mother, is Kathi Osborne. Osborne has motherly charm and pairs well with Fanny’s comedy and big personality. In the role of Eddie, a friend of Fanny, is Christopher Russell. Russell is bright and energetic, and although I enjoyed him througho 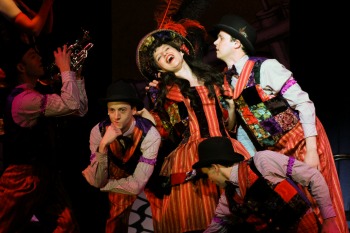 ut the production, he has great enthusiasm in the number “Rat-Tat-Tat-Tat.” In addition, the song, “Rat-Tat-Tat-Tat,” is a huge tap number choreographed by Kerry Lambert. It is a remarkable number that is full of zest and everyone that is part of this number needs applauded. If you have never seen a production of Funny Girl on stage, I highly recommend the current production at Dutch Apple Dinner Theatre.

Funny Girl runs at the Dutch Apple Dinner Theatre through May 2, 2015. For more information and tickets please visit their website at www.dutchapple.com or call the box office at 717-898-1900.

Final Thought: Funny Girl at Dutch Apple Dinner Theatre will impress and charm audiences throughout the production. In addition, Anna Baker who plays Fanny Brice gives an exquisite performance and she is remarkable when she sings “I’m the Greatest Star” and “Don’t Rain on My Parade.” If you have never seen Funny Girl on stage, do not miss this opportunity to see this wonderful musical.