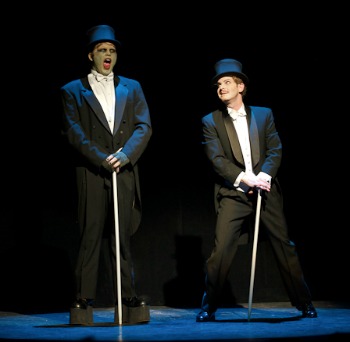 A big, splashy Mel Brooks musical has arrived in Lancaster, Pennsylvania at the Fulton Theatre. It’s Young Frankenstein, and it has a wonderfully talented cast, big dance numbers and, of course, a monster. This musical is based on the Mel Brooks movie of the same name and it is funny, witty, and will have audiences laughing. The Fulton Theatre has created a show that will dazzle audiences, and it is one of the best shows I have seen at the Fulton this season.

This production of Young Frankenstein is so well constructed, from the set to the actors to the lighting design, that it awakens the magic of live theatre. Marc Robin serves as the director and choreographer of this show. I need to commend Robin for the direction and choreography of this show, and the dance numbers in the show are phenomenal. The sets for Young Frankenstein are amazing, bravo to Thomas M. Ryan, the Scenic Designer. Anthony Lascoskie Jr. is the Costume, Hair and Makeup Designer, and the costumes in this production are exquisite. Jacob Mishler is the Sound Designer and Katelin Walsko is the Props Designer. Dan Efros is the Lighting and Projection Designer. In addition, Aaron McAllister serves as the Musical Director.

The cast for this production are all strong, and they bring zeal to Young Frankenstein. Jamison Stern plays Dr. Frederick Frankenstein. In this role 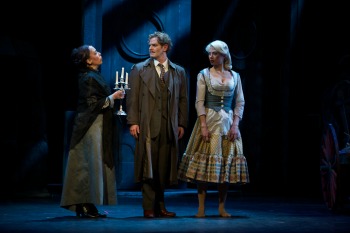 Stern embodies the spirit of Gene Wilder (Wilder played Dr. Frankenstein in the movie), but he also adds his own originality. Stern gives a powerful performance as Dr. Frankenstein.  Ben Liebert plays Igor and this character adds humor to the show. One of the key ingredients of this show is the comedic chemistry between Igor and Dr. Frankenstein, if the two actors in these roles do not work together much of the humor of the show is lost. Luckily, for this production, these two actors have great chemistry onstage, and their performances throughout the show are exceptional. Playing the role of Elizabeth, Frederick’s narcissistic fiancée, is Jessica Lee Goldyn. I enjoyed Goldyn very much last season in A Chorus Line at the Fulton, and it was a pleasure to see her onstage again. Goldyn makes a grand entrance when she first appears onstage, and she is excellent throughout the show. In her song, “Please Don’t Touch Me,” Goldyn gives a strong dance performance. In the role of Inga, Dr. Frankenstein’s laboratory assistant, is Missy Dowse. Dowse plays up the innocence as Dr. Frankenstein’s sexy assistant, and her song, “Roll in the Hay” is strong vocally. Sandy Rosenberg plays Frau Blücher, and she has audiences laughing with her straight-faced humor. Rosenberg does an exceptional job of bringing out the comedy of her role, and she is very spirited in this part. Rounding out this wonderful cast is Herb Porter in the role of the Monster. Porter brings plenty of laughs especially in the number with the Hermit (Randal Keith),“Please Send Me Someone,” as well as working some impressive dance magic in “Puttin’ on the Ritz.”

I also want to mention the ensemble for this show because the entire audience could feel their energy on opening night. The members of this energetic ensemble are: Paul Aguirre, Michael Biren, Jessica Dey, Cameron Edris, Joseph Fierberg, Samantha Hewes, Andrew Kindig, Sabra Michelle, Michael Phillips, Cesar Razza, Katie Sina, Lauren Brooke Tatum, and Addie Tomlinson. This group brought a liveliness to the show that energized the entire production, and the numbers, “Transylvania Mania” and “Puttin’ on the Ritz” were two of the best musical numbers in the show.

The Fulton brings the magic of live theatre to Lancaster with their production of Young Frankenstein. However, it should be mentioned that Young Frankenstein is based on a Mel Brooks movie, and has adult themes throughout the show. Do not miss this show that is a guaranteed good time. For more information and tickets visit the Fulton’s website at www.thefulton.org or call their box office at 717-397-7425.

Final Thought:  Young Frankenstein is the Fulton at its best; it has dazzling sets and costumes, amazing choreography and strong performances. It is a show that is a guaranteed good time.

It was great! JD could not stop laughing!

Glad you liked it Sal, we enjoyed it too! Thanks for commenting.