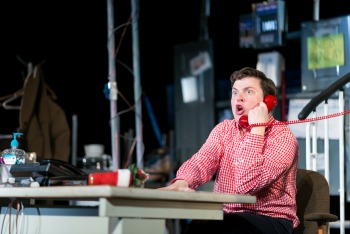 Fully Committed at Theatre Horizon is a brilliantly performed one-man show starring Michael Doherty. This play is about Sam, an over-worked reservation assistant at a trendy New York City restaurant. Sam’s job is to take calls from a myriad of potential diners ranging from aristocratic New Yorkers to tourists to Gwyneth Paltrow’s assistant. Doherty not only plays Sam, but also plays the variety of characters calling to make reservations at the restaurant. Fully Committed at Theatre Horizon, under the direction of Kathryn MacMillan, is a delightful comedy that will have audiences laughing from beginning to end.

Playwright Becky Mode continuously updates her script in order for it to reflect the explosion of the “foodie” scene since the play premiered Off-Broadway in 1999. The play not only tells the story of Sam‘s work life and how he deals with all the colorful people who call the reservation line, but it also tells a more personal story about Sam, the individual. This is where I think this play succeeds, as audiences learn about Sam’s struggling acting career as well as his relationship with his family. This personal storyline allows the audience to connect and empathize with Sam as he deals with this crazy and hectic day. 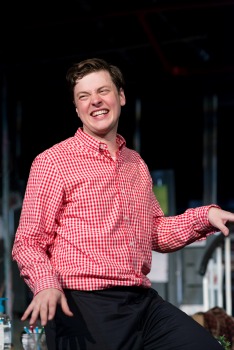 characters on stage. While sitting there, I was struck by Doherty’s incredible energy and talent. He capably plays all the characters and skillfully glides in and out of these various characters all with their own unique accents and mannerisms with ease. Not once did I question what was happening onstage. Doherty makes this show hilariously funny as he tells the story of Sam’s “day in the life” of answering phones at this upscale New York City restaurant. In addition to Doherty’s hysterical portrayal of these characters, he also adds a lot of heart to the role. There is a depth he adds to Sam in the way the audience can see his complete frustration with being an actor in New York, and feeling defeated knowing he cannot spend Christmas with his family. Doherty is first-rate in this production and his performance is one that should not be missed this spring.

In addition, the artistic team needs mentioning for this production. Brian Dudkiewicz designed the set that represents a windowless basement office area in the restaurant in which Sam’s works. Shon Causer is the Lighting Designer and Toby Petit is the Sound Designer. In addition, Janus Stefanowicz is the Costume Designer.

Fully Committed runs at Theatre Horizon through June 5, 2016. For more information and tickets visit their website at www.theatrehorizon.org or call the box office at 610-283-2230.

Final Thought: Fully Committed at Theatre Horizon is a hilarious and charming comedy that will have audiences laughing throughout the show. Michael Doherty provides a side-splitting and animated performance that displays incredible energy and stamina. Do not miss him in this show.