Go Back to the 80s with FLASHDANCE: THE MUSICAL at Hershey Theatre 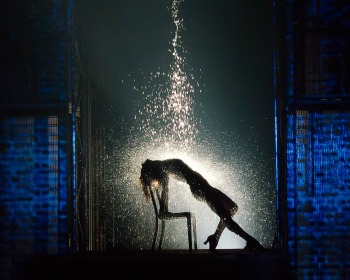 MTV, leg warmers, jean jackets, the moonwalk – all these things are reminiscent of the 1980s, and they all make an appearance in Flashdance: The Musical. This musical is based on the 1983 movie of the same name, and includes all the favorite songs from the film such as “What a Feeling,” “Maniac” and “Gloria.” Additionally, the musical has sixteen original songs. The show is fun, energetic, and an entertaining evening out.

Flashdance: the Musical tells the story of Alex Owens who is a welder by day, and a dancer by night. She works in a steel mill to pay her bills, but her passions and dreams are all about dancing and getting into the prestigious Shipley Dance Academy. The show takes place in Pittsburgh, Pennsylvania in the 1980s. The musical is a stage adaption of the 1983 film “Flashdance,” with music by Robbie Roth, and lyrics by Roth and Robery Cary. Tom Hedley and Robery Cary wrote the book for the show. Flashdance: The Musical is in the same spirit as the movie, and if you liked the movie, you will love the musical. Sergio Trujillo (Memphis, Jersey Boys) directed and choreographed this musical. The show is full of energy, and the choreography and costumes will transport audiences back to the 1980s.

This musical is full of lively performances. Playing the role of Alex is Sydney Morton. Morton is passionate and likable in this iconic role, and her 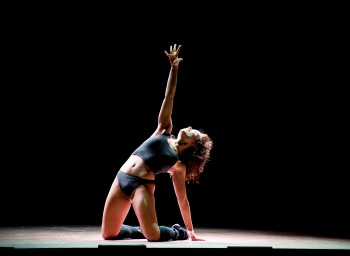 dance numbers are full of vitality. Vocally she is strong, and she shines in the numbers, “It’s All in Reach” and “My Turn.” Corey Mach plays Nick Hurley, the grandson of the CEO of the steel mill and who is being primed to take over the family business. Nick is determined to take Alex out on a date despite her determination not to date the boss. Mach is charming, and his duet with Alex, “Here and Now,” is one of the most impressive duets in the show. In the role of Gloria, Alex’s close friend, is Ginna Claire Mason. Mason is outstanding in this part, and she adds humor throughout the show.  Madeleine Doherty portrays Hannah, Alex’s mentor and teacher. Doherty brings a harsh honesty and kindness to this role, and the chemistry in the scenes between Doherty and Morton are heartwarming. Portraying the other two dancers, Tess and Kiki, who work at the club where Alex works are Kyli Rae and Kyra Da Costa. These two fine actors provide powerful dancing, and add sassiness to the roles. Da Costa’s performance in “Manhunt” and Rae’s performance in “I Love Rock ‘N’ Roll” are exceptional.

The one criticism I have about the show is that the musical version of Flashdance lacks depth. There is a backstory to Alex that is missing from the musical, and without this depth to her character, I did not gain a great emotional connection to her character. Don’t get me wrong, this show is full of zeal and highly entertaining, but it seemed to lack any true depth. However, this is the fault of the script, and not individual performances.

Flashdance: The Musical runs at the Hershey Theatre through May 4, 2014. For more information and tickets please visit their website at www.hersheytheatre.com or call their box office at 717-534-3405.

Photos courtesy of The Hershey Theatre

Final Thought:  Flashdance: The Musical will transport the audiences to the 1980s, complete with the clothes, music and dancing reminiscent of the decade. This show is highly entertaining, and audiences will have a great time seeing the story of Alex unfold.