FIG: The Fulton’s SINGIN’ IN THE RAIN is Rapturously Enjoyable

Singin’ in the Rain is adapted from the 1952 movie of the same name. The original production of the show opened in London in 1983 and the Broadway production opened in 1985. Betty Comden and Adolph Green penned the book for the musical and Arthur Freed and Nacio Herb Brown wrote the score for Singin’ in the Rain. The story of the show revolves around a movie studio’s transition from silent films to the “talkies,” and the stars of the silent films, Don Lockwood and Lina Lamont adapt to the change.

Curt Dale Clark (Don Lockwood) gives a stunning performance from his first song, “Fit as a Fiddle” until the end. Mr. Clark has the grace and charm of Gene Kelly in this role. He captivates the attention of the audience with the title song, “Singin’ in the Rain,” where it actually rains on stage. Clark’s singing and dance numbers are not to be missed.

Brian Shepard is Cosmo Brown, Don Lockwood’s friend and the musician for the studio. He entertains with his lighthearted comedy throughout the show. Shepard’s dancing is superb and amuses the audience with his rendition of “Make ‘Em Laugh.” Clark and Shepard’s song, “Moses Supposes,” is one of the more fun and energetic songs in the show. Lauren Blackman plays Kathy Selden, an aspiring actress who finds herself in an unexpected role in the “talkies.” Blackman is alluring in this role. This trio – Clark, Shepard and Blackman – stop the show with “Good Mornin.’” The singing and dancing in this number is one of the best songs in the entire show. 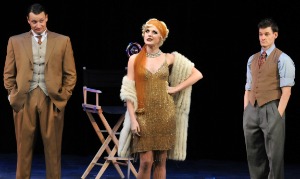 Emily Stockdale plays Lina Lamont, a popular silent film actress. Stockdale is tremendous in this role, and her portrayal of Lamont with her grating voice is skillfully done. David Girolmo’s talents are well served in his portrayal of R.F. Simpson, the head of the studio. Charis Leos plays multiple roles throughout the show, and she is always fantastic in bringing life and fun to her characters.

Marc Robin serves as the artistic director and choreographer for Singin’ in the Rain. Robin’s choreography is brilliant, especially in “Good Mornin’” and “Moses Supposes.” Aaron McAllister serves as the musical director for this show. Both Robin and McAllister need commended for the work they did for putting together the silent film clips that are featured throughout the show.

Singin’ in the Rain is the perfect lighthearted show for the holiday season. It is delightful and entertaining. It runs through December 29th. Call the box office today and reserve your tickets.