FIG: The Fulton Theatre’s A Chorus Line: A New Take on a Broadway Classic

The original production of A Chorus Line opened on Broadway in 1975 and ran for 6,137 performances. Marvin Hamlisch wrote the music for the show and Edward Kleban wrote the lyrics. It is now considered the sixth longest running Broadway show. Many people are familiar with the show and know the lyrics by heart. A Chorus Line gives audiences a glimpse into the audition process. The Fulton’s production of A Chorus Line reminds audiences why this show is still relevant thirty-eight years later.

Over the past few weeks there have been many people discussing how Marc Robin, the director and choreographer of A Chorus Line, made some changes to the show. In recent interviews with Robin he expressed the changes that were made were done to make the show more relevant to the twenty-first century. For those of you who are concerned about these changes, don’t be. The changes Robin made to A Chorus Line, add to the already spectacular musical and make it better.

One of changes I loved about the show is that it is set in a rehearsal studio instead of a bare stage. As the audience arrives to the theatre, they see dancers warming up for their audition. This adds to the unique vision on the show, and makes the audience feel as if they are getting a glimpse into an audition.  A Chorus Line is a play about passion and being able to survive working in theatre. This theme, although written decades ago, still resonates with audiences today. 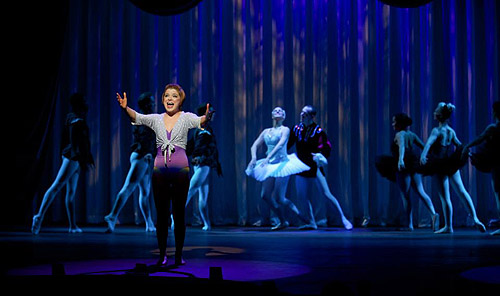 Every audience member has a different character they identify with or are cheering for, in A Chorus Line.  Every member of the Fulton’s cast of A Chorus Line is spectacular. Cary Michelle Miller plays Maggie Winslow, a sweet and quiet girl. Miller is graceful and portrays her character seamlessly. The character of Maggie is one of the actors in the song, “At the Ballet.” The way this song is portrayed:  the choreography, the staging, the singing and emotion – is worth the price of admission. I do not want to give any details to ruin it for people who have not seen the show yet, but this scene is breathtaking. Marisa Rivera portrays Diana Morales, a woman from the Bronx who is an eternal optimist. Rivera’s rendition of “Nothing” is remarkable, her voice is powerful and the staging of this musical number is phenomenal. Gabriel Malo plays Paul San Marco, who is quiet and struggling for acceptance. Malo portrays Paul with grace and he delivers Paul’s monologue impeccably. Audiences always empathize with the character of Paul, but Malo’s interpretation of this character may be the best I have seen. 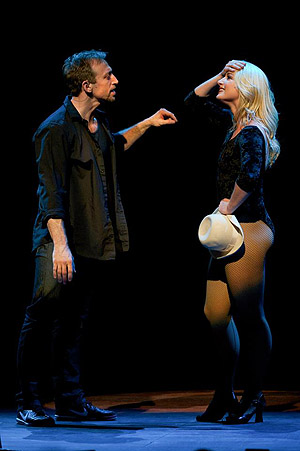 Jessica Lee Goldyn portrays Cassie. Cassie is trying to find work after spending years being a featured performer. Goldyn’s performance is full of emotion and her dancing is astounding. This is Goldyn’s Fulton debut, and I am hoping to see more of her talent in future performances. Nathaniel Shaw plays Zach, the director and choreographer of the show. Through Shaw’s portrayal of Zach, audiences witness the difficulties and personal connections involved in the audition process. The emotion that Shaw displays when he has to pick only eight dancers illustrates to audiences the connection people make with each other in a short amount of time. The entire cast of A Chorus Line is remarkable, they are a talented group and all involved with this show did an amazing job.

In addition to the fantastic cast, and director and choreographer, Marc Robin, there are others that also need to be commended for their involvement with this production. Samantha Hewes serves as the assistant director and choreographer. William Mahoney is the scenic designer, Paul Black is the lighting designer, Anthony Lascoskie Jr. designs costumes and the musical director is Aaron McAllister. In addition, Aaron A. Young is the Managing Director of the Fulton Theatre.

Your website is SUPER! I especially love the historical information to provide about each show. Thank you and please keep it coming!