FIG: Go, Go, Go to The Fulton’s JOSEPH AND THE AMAZING TECHNICOLOR DREMCOAT 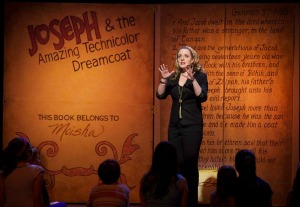 I have seen Joseph and the Amazing Technicolor Dreamcoat numerous times, and the Fulton’s production of this show is by far my favorite. The show is full of energy, entertainment and enjoyment. From listening to the people around me, I can guarantee that everyone had as much fun at the show as I did. Before I continue writing this review, if you do not have tickets to this show, you must get them now. The Fulton’s Joseph and the Technicolor Dreamcoat should not be missed, it is a spectacular show.

For those of you who are not familiar with Joseph and the Amazing Technicolor Dreamcoat, this show is based the story of Joseph and his coat of many colors, the same Joseph whose story is told in the Book of Genesis. Joseph was born into a family of twelve boys, all sons of Jacob. Jacob wants to show everyone how pleased he is with his son, Joseph, and he presents him with a multicolor coat. This in turn, arouses jealousy in the other eleven sons.  Tim Rice (lyrics) and Andrew Lloyd Webber (music) did the music and lyrics in this show. They also collaborated on the music and lyrics for Jesus Christ Superstar and Evita. The Fulton’s version of this show is bold, energetic, and fun for the entire family.

Once again, Marc Robin has turned a traditional show into something extraordinary. With his direction and choreography, he made this show 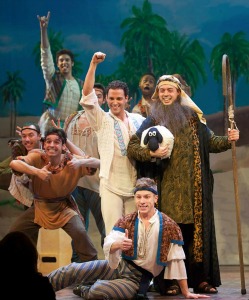 exceptional. Abby Mueller plays the Narrator for the show and she is emotive in her expressions, as well as has a strong voice. Joseph is played by Nathan Meyer, and he is excellent in this role. The song “Close Every Door to Me” is one of the best vocals of the show. Andrew Kindig plays Jacob, and he is an amazing actor to watch. Kindig is entertaining and humorous as Jacob, and demonstrates his fine singing voice. This show has energetic dance numbers, and the people who play the brothers in this production deserve applause for the fantastic dance numbers. The brothers of Joseph are played by: Michael Pilato, Kevin Curtis, Nathaniel Shaw, Ben Cullen Walker, Cody D. Smith, Casey Garvin, Sal Bucci, Edward Andrew Lawrence, Gabriel Malo, Alex Pepper, and Joey Abramowicz. What I really enjoyed about the Fulton’s Joseph and the Amazing Technicolor Dreamcoat is the actors looked like they were having as much fun as the audience, especially in the numbers “Go, Go, Go Joseph” and “Joseph Megamix.”

Do not miss the Fulton’s Joseph and the Amazing Technicolor Dreamcoat. It is fun-filled show for the entire family. This show runs through June 30, 2013. For tickets call the Fulton’s box office at 717-397-7425 or the Fulton Theatre  online at www.thefulton.org.

Final Thought: Joseph and the Amazing Technicolor Dreamcoat is a fun-filled show for the entire family. The cast of this production is exceptional. Do not miss this production.