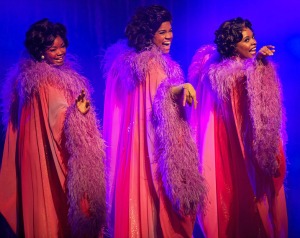 Dreamgirls opened on Broadway in 1981 at the Imperial Theatre and was nominated for thirteen Tony awards.  Henry Krieger wrote the music for Dreamgirls and Tom Eyen wrote the book and lyrics. The story traces the rise as well as the tribulations of a female singing trio in the 1960s and 70s. The story is about finding your own voice, and staying true to it. The Fulton’s Dreamgirls is full of sequins, spotlights, and energy. The show dazzles and entertains, and it is a story everyone can relate to.

Dreamgirls has a cast of actors that are extremely talented. The three women who make up the Dreams are the characters Effie White (Bryonha Marie Parham), Deena Jones (Britney Coleman), and Lorrell Robinson (Trista Dollison). Parham’s Effie is a force. Her emotion comes through with every song and scene. Her song “(And I am Telling You) I’m Not Going” is strong, but the song in act two, “I am Changing” is dynamic. Hearing Parham sing is worth the price of a ticket. Trista Dollison plays Lorrell Robinson, and she is a very talented singer. Dollison’s highlights in the show are her scenes with Kevin Roston Jr. as James Thunder Early. Lastly, in this group of extremely talented actors is Britney Coleman as Deena Jones. Coleman transforms in the show from a shy performer to a star. Watching Coleman’s character evolve is another highlight of this show. The emotion of this character is evident in Coleman’s portrayal of Deena.  This group of actors is stunning in their roles, and from the beginning of the show to the end, their stories capture the audiences’ affection. 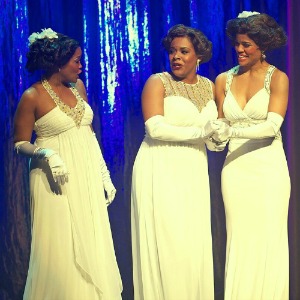 Kevin Roston Jr. plays James Thunder Early, and steals the show whenever he is onstage.  Byron Glenn Willis plays the scheming Curtis Taylor Jr. Willis is able to show Curtis’s charm in the beginning and transform him into the scoundrel that chooses money over everything else. Eric B. Anthony plays C. C. White who portrays the songwriter for the group the Dreams.  Anthony’s character is soft-spoken and eventually transforms into a person who pursues what he wants. There are many characters that transform throughout the show, and Anthony is another actor that is amazing to watch as his character evolves.

Marc Robin is the director and choreographer of Dreamgirls, and he puts together a dynamic show that is full of passion and energy. The costumes in this show are stunning and Kurt Alger deserves applause for the phenomenal costumes. Paul Black is the lighting designer and needs applauded for his dazzling lighting. Lastly, Robert Andrew Kovach needs commended for his scenic design.

Do not miss the opportunity to see the Fulton Theatre’s amazing production of Dreamgirls. The show runs through May 12, 2013. Call the box office at 717-397-7425 or reserve tickets online at www.thefulton.org.

As published in The Adventures of the Artful Blogger on April 29, 2013.