FIDDLER ON THE ROOF Touches the Heart at EPAC 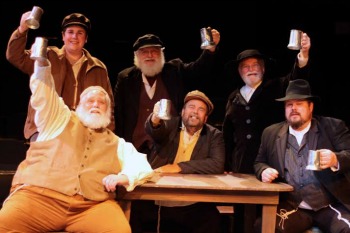 Anytime I hear someone talking about Fiddler on the Roof the song “Tradition” immediately comes to mind. Not only is it the first big number in the show, but it is the basis of the plot of this musical. Director, Patricia Kautter, wrote in the director’s notes, “‘Tradition,’ the show’s opening number, and its center, its guts.” There are many subplots in Fiddler on the Roof revolving around religion, family and love, but at the core, this story is about tradition. As Tevye says at the end of the song “Tradition,” “Without traditions, our lives would be as shaky as a fiddler on the roof!” EPAC’s production of Fiddler on the Roof reminds audiences of the importance of family, and this show touches the heart of anyone who sees it.

Fiddler on the Roof opened on Broadway in 1964, was the first show to surpass 3,000 performances, and it was the longest running musical for ten years. The musical is based on Shalom Aleichem’s story, Tevye and his Daughters. Joseph Stein penned the book for the musical, Jerry Bock wrote the music and the lyrics were written by Sheldon Harnick. The 1964 production of Fiddler on the Roof was nominated for ten Tony Awards, and it won nine including Best Musical. The show inspired a movie adaptation in 1971 and numerous revivals. The show is set in the earth 1900s in Czarist Russia, and tells the story of Tevye and his wife, Golde, who have five daughters. Tevye and Golde attempt to maintain religious traditions, even though the world around them is changing.  EPAC’s production of Fiddler on the Roof is a wonderful production that is full of heart, merriment and a reminder of the importance of family.

The actor who portrays Tevye, has to be able to thrill the audience with songs like “If I Were a Rich Man,” evoke sentiment, as well as make the audience laugh. There is a depth to Tevye, and it is a tough role to portray because almost everyone has seen Fiddler on the Roof in some form at some point in their life. Ed Fernandez is Tevye in EPAC’s production of Fiddler and he is exceptional in this part. He is strong, humorous and brings a depth of character of the role. Fernandez’s portrayal of Tevye is one of the best I have seen.  His rendition of “If I Were a Rich Man” is full of liveliness and this number is outstanding. Tevye’s wife, Golde, is played by Trish Corcoran. Corcoran brings sternness and tenderness to Golde, as well as effectively shows Golde’s desperation to make sure her daughters find a good husband. Her duet with Fernandez, “Do You Love 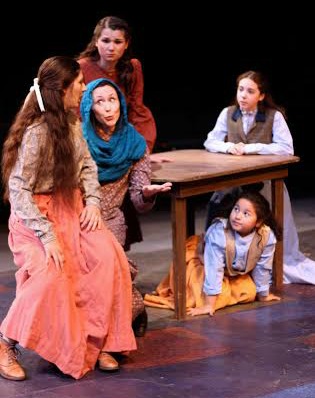 Me?” is sentimental, introspective and an endearing duet between the two. The daughters of Tevye and Golde: Tzeitel (Kathy Becker), Hodel (Rebecca Bauer), Chava (Sophie Gialloreto), Shprintze (Oliva Brown) and Bielke (Oliva Tran-Speros) successfully portray the devoted children. The song, “Matchmaker” has the daughters dreading what kind of match the matchmaker, Yente, will find for them. The vocals as sung by the three older daughters, Becker, Bauer, and Gialloreto are delightful. Claire Daher portrays Yente, the matchmaker, and she brings this character’s strong personality to life. Motel, the tailor, is played by Darren Wagner. Wagner exudes joy and a zest for life when he sings “Miracle of Miracles,” and this is one of my favorite songs in this production. Alexander P. Bannon plays Perchik, a university student. The song “Now I Have Everything,” which he sings with Bauer, is strong and full of energy. EPAC’s Fiddler on the Roof is full of big dance numbers, strong vocals and it is a magnificent way to end their 2013 season.

Fiddler on the Roof has large musical numbers that are flourishingly choreographed by  Patricia Kautter. A few of my favorite numbers of the show are the opening number, “Tradition,” “To Life” and “The Dream.” All these songs exude energy and the costumes in “The Dream” are dazzling. Costume designer Kate Willman needs commended for these beautiful costumes. In addition, JP Meyer needs mentioning as the Music Director and Mikes Rhodes as the Set Designer. EPAC’s Fiddler on the Roof is an exceptional production and I would recommend getting your tickets soon before it is too late.

Fiddler on the Roof runs at EPAC through December 21, 2013. For more information and tickets visit their website at www.ephrataperformingartscenter.com or call their box office at 717-733-7966.

Final Thought: EPAC’s Fiddler on the Roof is charismatic and thrilling. It is a show for everyone – its insights, conflicts and story about family are a familiar tale that everyone can relate to. This is a production where everything is done impeccably well.