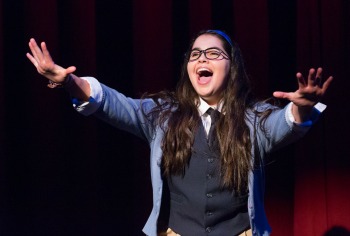 It is time for the holiday tradition at People’s Light, the Panto. Every year I find these shows delightful, and always leave the theatre full of joy. If you have never attended one of the Pantos at People’s Light I would highly recommend it. These shows are unique to this area, and People’s Light does a different Panto every year. They are always full of energy, creative and people young and old, and everyone in-between will enjoy the show. This year’s Panto at People’s Light is Sleeping Beauty: A Musical Panto, and it is a wonderful and creative retelling of the classic fairy tale.

For those not familiar with a panto, it is a British tradition during the holiday season. A panto retells a well-known story or fairy tale and turns in on its ear. According to People’s Light, “Each [Panto] possess certain shared elements (the touchstone of a well-known story, a ‘messy bit,’ a sing-along ‘silly song,’ talking animals, flying candy and a Dame.)” Sleeping Beauty: A Musical Panto is a wonderful way to introduce kids to live theatre because it is lighthearted fun, full of energy and interactive.

This year’s Panto, Sleeping Beauty, was written by Pete Pryor and Samantha Reading. The music and lyrics are by Alex Bechtel. The story revolves around a young princess, Aurora, who is cursed by the wicked Chanteuse, the curse states that by the young princess’s sixteenth birthday she will prick her finger on an enchanted record player needle and fall into a deep sleep. Therefore, the King has banned all records and record players from the Kingdom, Paoli Shoals, in order to keep his daughter safe. However on the dawn of Aurora’s sixteenth birthday strange things begin to occur, and the colorful characters of Paoli Shoals need to work together to keep the princess safe.

The entire cast, under the direction of Pete Pryor, will charm audiences as they tell this fun-filled tale that creates a caricature of the 1970s record culture. Playing the role of Aurora is Ariana Sepúlveda. Sepúlveda plays this character with a genuineness, and she brings out Aurora’s thoughtfulness and intelligence. In addition, her song “Lost in the Stars” is a beautiful song and vocally strong. Playing the King is Tom Teti. Teti delightfully portrays the hip King whose main goal is to keep his daughter safe. Mark Lazar plays “The Dame,” Mama C. Lazar is always delightful as the Dame, and he always brings a ton of personality to these roles. In the role of the villain, Chanteuse, is Kim Carson. Carson comes across as a mix between David Bowie and Stevie Nicks. Carson provides a strong performance, and audiences will love to “boo” her villainous behavior. In addition, her song, “I am Bad Just Because,” is hilarious. Susan McKey portrays, Aunt Tiki, a close family friend and friend to Aurora, who uses all of her skills in protecting the princess. McKey is animated in this role, and I adored her debonair performance as she channels a well-known movie spy of the era. The band of talking animals, Sam Slug (Josh Totora), Kerri Crane (Emily Kaye Lynn) and Mudbug (Brendan Norton) are an animated and musically gifted group. They in part act as narrators and help move the show along, and Totora, Lynn and Norton seem to be having a lot of fun with their roles onstage. Playing the Ogre, another colorful creature inhabiting Paoli Shoals, is Hannah Van Sciver. Sciver is a pleasure to watch as she uses few words, and a boat load of physicality to get her point across. Luke Brahdt plays Boy, Ogres son, who is very interested in entomology. Branhdt is entertaining to watch as he is animated and full of energy onstage. Also, he is vocally strong and full of zeal in the song, “You Can’t Stop the Music.” Tabitha Allen plays the Moon, and she adds further humor and silliness to the show.  Rounding out the cast is Abigail Brown as the star, Sirius. Brown is endearing and audiences will love her as she dances her way across the stage. 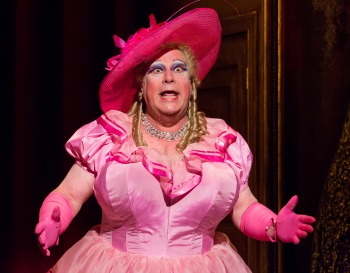 The set designed by Roman Tatatowicz is magnificent. The set is adorned with a golden tree and gold records. In addition, I appreciated the creative effect of the animated rocket, moon and stars that tie directly into the story. The colorful costumes were designed by Nikko Delhomme. Paul Hackenmueller is the Lighting Designer and Lucas Fendlay is the Sound Designer. In addition, Thomas Fosnocht III is the Music Director.

Sleeping Beauty: A Musical Panto runs a People’s Light through January 15, 2017. For more information and tickets visit their website at peopleslight.org or call their box office at 610-644-3500.

Final Thought: Sleeping Beauty: A Musical Panto is a delightful show that audiences of all ages are sure to enjoy. People will love the retelling of this classic fairy tale with a cast that is entertaining and amusing. Do not miss a chance to see this great holiday tradition of the Panto on stage at People’s Light.