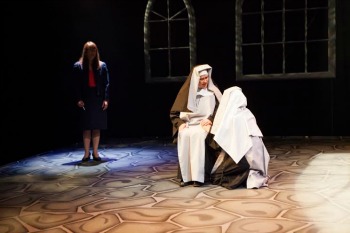 One of the reasons I love Ephrata Performing Arts Center is that this theatre has the perfect balance of well-done musicals and thought provoking plays. Agnes of God, the current play at EPAC, is one of those plays that will have people talking about the play long after they leave the theatre. Ephrata Performing Arts Center beautifully captures the spirit of this production, giving the audience an impassioned theatre experience.

Agnes of God is a thought-provoking play that interweaves the lives of three women: Sister Agnes, Mother Miriam Ruth, and Doctor Martha Livingston. The plot revolves around Sister Agnes who was found unconscious in her room with “blood everywhere,” and a mysterious death of a newborn baby found in the wastepaper basket in Agnes’s room. Dr. Livingston, the court-appointed psychiatrist, wants to find out what happened to Agnes and the newborn baby, but she clashes with Mother Superior. This show by John Pielmeir, opened on Broadway in 1982. This show was nominated for two Tony Awards, and Amanda Plummer who played the role of Agnes, won the Tony for Outstanding Featured Actress in a Play. In 1985, Agnes of God was adapted to a movie, which starred Jane Fonda, Meg Tilly, and Anne Bancroft.

Agnes of God, under the direction of John Gancar, is the perfect balance of emotion and wit. One reason I really liked this production is that even 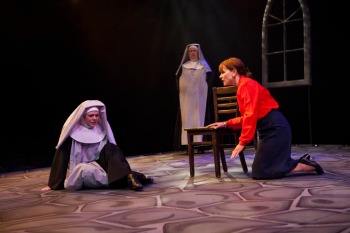 though this show is stirring, there are moments that it captures biting sarcasm that adds to the tension between Dr. Livingston and Mother Superior. In the role of Agnes is Juliana Wardle. Wardle highlights Agnes’s innocence and faith, and does an excellent job at portraying to the audience how Agnes is haunted by her past. Playing Dr. Livingston is Meegan Gagnon. Gagnon’s character is determined to find out what exactly happened to Agnes, and she is compelling and dynamic in this role. Rounding out this cast is Robin Payne who plays Mother Miriam Ruth. Payne creates a layered character in this role, which is sensitive, stern and authoritative when she needs to be. The strength of this cast comes from the way they are all able to work together weaving their stories full of compassion and distrust, and this leads to the explosive final moments of the play.

Agnes of God runs at the Ephrata Performing Arts Center through June 28, 2014. For more information and tickets visit their website at www.ephrataperformingartscenter.com or call the box office at 717-733-7966.

Final Thought: Agnes of God excels at the Ephrata Performing Arts Center with a talented cast and strong direction. This show is a passionate and thought-proving play, and it definitely provides for a night of fine theatre.

I much prefer the thought provoking over the musicals. This cast nailed it!