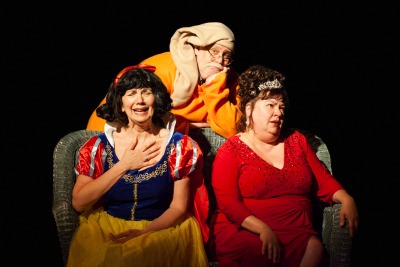 Ephrata Performing Arts Center’s production of Vanya and Sonia and Masha and Spike is an incredibly enjoyable production. The play is witty, funny and absolutely charming. This cast is first-rate as they perfectly portray this offbeat group of characters who relish in discussing their dashed dreams and lost hopes, but they do so with hilarious effect. Vanya and Sonia and Masha and Spike is about three siblings, their family dynamic and the feelings of sibling rivalry, resentment and anger they feel towards one another, and this forms the basis for the humor of the show.

The setting for the play is Bucks County, Pennsylvania which is also where the playwright, Christopher Durang, currently resides. Vanya and Sonia and Masha and Spike won the 2013 Tony Award for Best Play. Elements of the show are influenced by the writings of Anton Chekov, including references to The Cherry Orchard and Three Sisters. The production at EPAC, under the direction of Pat Kautter, is witty and intelligent, and will have audiences laughing at the entertaining commentary throughout the show.

Edward R. Fernandez portrays Vanya, a character who seems comfortable in the everyday routine of his life and who tries to keep the peace among his sisters. Fernandez perfectly portrays this low-key character. I enjoyed Fernandez’s entire performance, and the stand out moment for me was in act two with his engrossing delivery of an intense monologue about how life used to be, how in previous decades television shows engendered the Arts to be a part of the national consciousness and how people were connected by this and thus more considerate of one another due to this shared experience. Fernandez is impassioned and full of conviction in this scene, and I found his monologue incredibly powerful. Playing Vanya’s sister, Sonia, is Sharon Mellinger. Mellinger is brilliant in this role as she uses the perfect combination of sarcasm and wit to depict this character who has taken care of everyone else for a majority of her adult life, and in the process neglected to have a life of her own. In addition, Mellinger and Fernandez have an entertaining repartee with one another throughout the show, especially in the opening scene. Cynthia Charles portrays Masha, the famous sibling who has enjoyed a successful acting career. Charles breathes life into this character who appears only to care about her own needs and her desire to be the center of attention. Charles’s performance is outstanding as she is full of life and is splendid as this narcissistic character. Brian Viera portrays Spike, the self-absorbed boyfriend of Masha. Viera is hysterical as the vapid Spike. Cassandra Robinson plays Cassandra, the psychic housekeeper. Robinson is clearly having fun with this role and she is animated and very humorous in her portrayal of this character. Rounding out the cast is Jennifer Amentt who plays Nina, the next-door neighbor, and who is also an aspiring actor. Amentt brings an innocence and energy to this role as she looks at the world through rose colored glasses, which is in stark contrast to the other characters in the play.

Branden Hooter designed the detailed set, which depicts the interior and porch of a house in Bucks County. Kate Willman designed the incredible costumes, in particular the regalia for the costume party.  Jeff Pettyjohn is the Sound Designer and Mike Wiltraut is the Lighting Designer.

Vanya and Sonia and Masha and Spike runs at Ephrata Performing Arts Center through June 18, 2016. For more information and tickets visit their website at www.ephrataperformingartscenter.com or call the box office at 717-733-7966.

Final Thought: Vanya and Sonia and Masha and Spike at Ephrata Performing Arts Center is a clever comedy that has an entertaining script and outstanding performances. It is a production that is full of dramatic outbursts, humorous dialogue and a brilliant cast.