EPAC’S SUNDAY IN THE PARK WITH GEORGE is a Masterpiece 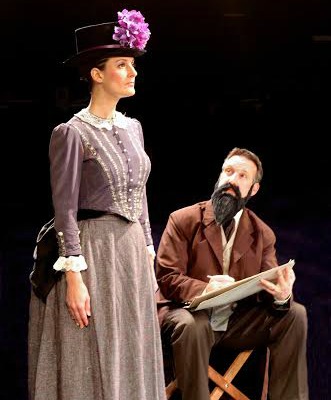 “Order. Design. Tension. Balance. Harmony.” Those are the words that George Seurat uses to describe the vision in his head as he paints his masterpiece, A Sunday Afternoon on the Island of La Grande Jatte, in the first act of Stephen Sondheim’s Sunday in the Park with George. This show is passionate, warm, and emotional, and one of this reviewer’s favorite shows. EPAC’s production of Sunday in the Park with George is exceptional, and this musical exhibits beautiful sets and costumes with performances that are masterful.

At opening night, director, Edward Fernandez, stated that Sunday in the Park with George is his favorite Sondheim show, and this passion comes through in every element of this production. In the role of George is Sean Young. Young’s performance is exceptional as his long and thoughtful gazes convey the deep concentration of an artist visualizing his masterwork as he transforms this vision from his mind’s eye to the canvas. Vocally, Young is strong, and he shines in the songs, “Finishing the Hat” and “Putting it Together.” Stacia Renell Smith plays Dot, and she is seamless in this role. Smith exhibits the perfect 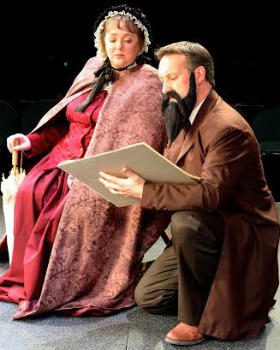 combination of passion, frustration, wit and charm to make her performance one of the best in the show. One of her best numbers in the show is, “Sunday in the Park with George,” where she is animated and brings humor to her character that allows the innocence and lightheartedness of the character to shine through. The duet between Young and Smith, “Move On,” is sheer perfection. The leads in this show are matched with an equally strong supporting cast who take on all the nuances of the portraits in the painting. In the role of George’s mother is Elizabeth Pattey, and she shows off her beautiful voice on “Beautiful.” Playing Jules and Yvonne, a rival artist and his wife, are Richard Bradbury and Kristie Ohlinger. Bradbury and Ohlinger are effective in portraying the dismissive sentiment and possible jealousy many other artist of the time felt towards Seurat’s work that was new and very technically inspired for his time. The last couple I need to mention are Tara Beitzel and Gene Ellis, who play the American couple in act one, and they bring humor and a pleasing Southern charm to their roles. Beitzel and Ellis will have audiences laughing with their banter. The entire cast of this production will impress audiences with the song “Sunday” which is stunning both vocally and visually.

Sunday it the Park with George is a challenging show in all aspects, but especially visually due to the recreation of this famous artist’s master works. EPAC succeeds in every aspect of this production and I need to mention the people behind the scenes. Mike Rhoads designed the wonderful set. Serving as the choreographer is Pat Kautter, and Jordon Ross Whinhold is the Assistant Director and Vocal Director. Jeff Cusano is the Light Designer, Steve Schelling is the Technical Director, and Ryan Miller is the Sound

Do not miss EPAC’s production of Sunday in the Park with George.  The show runs through May 17, 2014. For more information and tickets visit their website at www.ephrataperformingartscenter.com or call the box office at 717-733-7966.

Final Thought: EPAC’s production of Sunday in the Park with George is dazzling, passionate and masterful. I am delighted by the magnificence of this production, and it is a reminder why EPAC is “theatre that matters.”