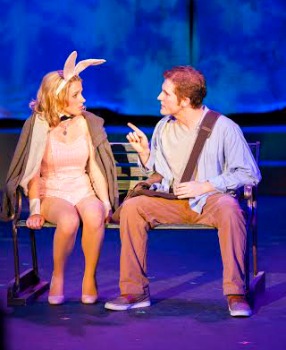 Before I even begin this review, let me say that if you have never seen Legally Blonde - the musical, go get tickets to see this production at Ephrata Performing Arts Center. This show is full of energy and has a lot of heart. It is everything you expect to see in a splashy summer show – big dance numbers, loads of spirit, and everyone having a great time at the show. This is exactly what EPAC delivers with this production, and people had so much fun the night I was there, that I overheard several people talking about coming back a second time to see the show. EPAC’s production of Legally Blonde has audiences laughing out loud, and watching this show is a sheer delight.

Legally Blonde is based on the novel Legally Blonde by Amanda Brown and the 2001 movie of the same name. The show tells the story of Elle Woods, a sorority girl who is getting her degree in Fashion Merchandising at UCLA, and ends up at Harvard Law School to win back her ex-boyfriend, Warner. Legally Blonde opened on Broadway in 2007, and was nominated for seven Tony nominations. The original cast included Laura Bell Bundy as Elle Woods, and Christian Borle as Emmett. Jerry Mitchell directed and choreographed the Broadway production.

The cast in EPAC’s production of Legally Blonde are full of enthusiasm and energy, and this is 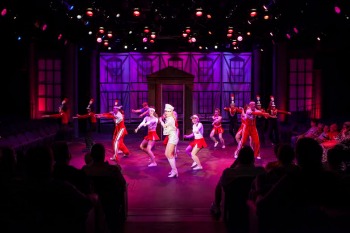 one of the strongest casts I have seen do this production. In the role of Elle Woods is Amy Ward. Ward gives a complexity to Elle where she is not only fun and animated, but she also has soul. This role can be hard to pull off because she has to be able to make the trials and tribulations Elle experiences pull at the heartstrings and feel sincere. Ward does this well, and makes this character one of the better Elle Woods I have seen. Sean Deffley plays Emmett, a teaching assistant for Criminal Law 101, and Elle’s mentor. Deffley is charming and pleasant to watch as he transforms from a focused law student to the romantic lead in act two. The duet between Deffley and Ward, “Take it Like a Man,” is one of my favorite numbers in the show, and they both touched my heart in the number “Legally Blonde.” Playing the role of Warner, Elle’s ex-boyfriend, is Jordon Strybos. Strybos successfully portrays this very self-centered character, and he does well at humanizing this somewhat clueless and egotistic persona. Niki Boyer-Swatski plays the beautician Paulette. Boyer-Swatski is perfect in this role, and she leaves audiences laughing in hysterics with her antics. Her voice is strong, and her rendition of the song “Ireland” is wonderful. Lauren Adkins portrays Vivienne, the unyielding brunette who is Elle’s competition for Warner’s affections. Adkins is persuasive in this part, and gives a strong performance especially in “Legally Blonde Remix.” Jim Rule plays Professor Callahan, a brutal law professor, and he has a strong presence onstage.  His performance in “Blood in the Water” is forceful. Alyssa Miller portrays Brooke, exercise guru and accused murderer. Miller is full of energy as she leads a talented cast of dancers in “Whipped into Shape.” One more group of people I need to mention are the Greek Chorus who appear in unexpected places throughout the show. They are played by Madeline Shiffer, Corina Connelly and Heidi Carletti. These three talented actors are full of zeal, and they shine throughout the show. The entire cast of Legally Blonde are strong and energetic from the beginning of the show with “Omigod You Guys” until the end with “Find My Way.” And, of course, staying true to the plot of Legally Blonde this show is complete with appearances by two adorable dogs who plays Elle’s dog, Bruiser, and Paulette’s dog, Rufus.  Director and Choreographer Cody Smith should be proud of this incredible show.

Legally Blonde runs at the Ephrata Performing Arts Center through August 9, 2014. For more information and tickets visit their website at  www.ephrataperformingartscenter.com or call their box office at 717-733-7966.

Final Thought: EPAC’s production of Legally Blonde is one of my favorite shows I have seen this summer. It is a show that is full of heart and pizazz, and a delightfully entertaining production. If you are looking for a happy and feel good musical this summer, you do not want to miss this production.