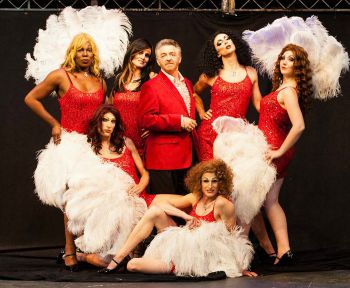 Every summer Ephrata Performing Arts Center does a musical that has big musical numbers, an incredible cast and music that will leave audiences humming the songs as they leave the theatre. This year, that musical is La Cage Aux Folles. La Cage Aux Folles is a musical by Harvey Fierstein and Jerry Herman that is based on the 1973 French play of the same name by Jean Poiret. This musical comedy under the direction of Rich Repkoe is one of the best shows I have seen this summer. The cast of this production is incredible, and it is one of those shows that not only will make audiences laugh, but also provides a number of powerful musical numbers.

The basic story of La Cage Aux Folles is that of a boy, Jean-Michel (who is the son of Albin and George) meets girl, Anne. However, the complication comes in that Anne’s parents are extremely conservative, and her father is the head of the “Tradition, Family and Morality Party” whose goal is to close all the local drag clubs. However, George owns a popular drag club, Saint-Tropez, and Albin is the star drag performer. Anne’s parents want to meet their future son-in-laws parents, and once they discover that Albin and George are a couple, have a son, and own the Saint-Tropez nightclub, a great upheaval arises. Although there are plenty of moments that will make audiences laugh, this musical has many moving musical numbers that are poignant and touching.

The cast of La Cage Aux Folles at EPAC is charming, full of vibrant energy and entertaining. Edward R. Fernandez plays Albin, and he embodies 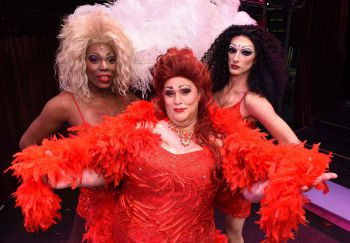 this role. Fernandez is lively and full of heart in this part. In addition, there is a moment at the end of act one that can make or break this show, and that is the number, “I Am What I Am.” This is the most powerful number in the show, and Fernandez excels in this song, and brings out every bit of emotion that is evident in this number. He is also full of pizazz in “The Best of Times.” Fernandez is in his element in this role, and this is one performance that should not be missed this summer. Ken Seigh plays George, and he has a strong and captivating presence onstage. He effectively makes the audience an extension of the show through his interactions and mannerisms.  Seigh embraces this part and he brings out the congenial and inviting personality of George. Seigh and Fernandez have a wonderful dynamic onstage, and they have many emotional and tender moments. Sean Deffley portrays Jean-Michel. Deffley expertly evolves from a young man determined to impress his fiancée’s parents to a person who embraces who he is and who his parents are. He is kindhearted, and Deffley brings this to light throughout his performance.  Sydne Lyons portrays Anne, Jean-Michel’s fiancée, and she is lovely. Lyons and Deffley have a nice chemistry and work well together portraying the innocence of young love.  The performance by Irving Gonzalez as Jacob, the butler/maid who is eager for a moment on stage at the Saint-Tropez nightclub is hilarious. Elizabeth Pattey plays Jacqueline, the chic owner of a restaurant. Pattey brings poise and eloquence and she has a sheer presence that makes this role stand out. Lastly, I need to mention the dynamic Les Cagelles, the talented dancers who perform at Saint-Tropez: Alex Weaver, JP Welliver, Michael Duschel, Alyse Dilts, Heather Bounds and James Barksdale.

I would be remiss if I did not mention the Artistic Team that helped make this show a delightful success. Victor Capecce designed a dynamic set that transforms from a nightclub, to café, to an apartment. Kate Willman designed the stunning costumes. The talented Irving Gonzalez is the choreographer. Jeff Cusano is the Lighting Designer. Zach Smith serves as the Music Director.

La Cage Aux Folles runs at Ephrata Performing Arts Center through August 8, 2015. For more information and tickets visit their website at www.ephrataperformingartscenter.com or call the box office at 717-733-7966.

Final Thought: La Cage Aux Folles at Ephrata Performing Arts Center is a dazzling show that is not only magnificent, but is also moving and poignant. The entire cast is energetic and engaging, and Edward R. Fernandez’s performance as Albin is one that will resonate with audiences and stay with you long after the show is over.