When I ended my review on Part I of Angels in America, I called the show the “must see play of the season.” That statement applies also to Part II of this show. Ephrata Performing Arts Center (EPAC) has taken on a huge undertaking of putting on Angels in America, which calls for an extreme commitment for everyone involved in this production. As director Edward Fernandez expressed in his opening statements, he took a chance with this production. This chance definitely paid off; as this is one of the more brilliant plays I have seen.

Angels in America Part II: Perestroika picks up where Part 1 left off, with the angel falling into the life of Prior Walter. All the characters from Part I appear in Part II, and the play continues the story of these people. The play contains stories of heartbreak, the difficulties of relationships, and passion. There are times of jubilation in this show, and there are points of intense sadness.  This play explores human relations and the core of an individual’s humanity, and the message within the show is still relevant in today’s society.

If you do not read the rest of this review, let me simply say this: do not miss EPAC’s production of this show. Angels in America: Part II exhibits outstanding acting and directing which generates one of the most important plays in the last thirty years. 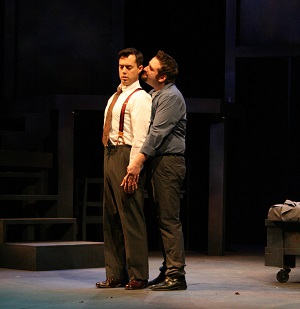 The plot of Angels in America Part II continues the stories of Joe and Harper Pitt, Roy Cohn, Louis Ironson, and Prior Walter. Audiences learn more about the story of Belize and Hannah Pitt. Belize is the night nurse, and one of his patients is Roy Cohn. Adam Newborn plays Belize, and the energy and passion he brings to this role is remarkable. Through Newborn’s portrayal of Belize, audiences witness Belize’s loyalty to his friends, his fervor for life and his frustration at the unfairness of circumstances around him. The role of Belize makes audiences laugh, as well as empathize with the people and situations he encounters. Newborn brings an energy to this role that is remarkable. I hope to see this actor again on stage in the area. Elizabeth Pattey, plays a variety of roles in the show, but her performance as Hannah Pitt, Joe’s mother, was incredible. Pattey conveys individuality and humanity to the role of Hannah. This character’s eyes are opened to a wider view of the world, and Pattey brings to life this transformation. Kristie Ohlinger portrays the Angel and she does so with grace and power. Ohlinger brings grandness to her portrayal of the Angel, and convinces audiences of her power with ease. The rest of the actors in Angels in America: Richard Bradbury, Bob Breen, Amy Carter, Daniel Greene, and Andrew Kindig all give outstanding performances as they did in Part 1. Each actor in this play performs with grace, talent, passion and skill, and these performances are being talked about all over Lancaster County.

Angels in America is one of the most important plays being produced this season. Edward Fernandez and Patricia Kautter need commended for taking the second part of Angels in America and making the production flawless. The direction of this show fully captures the suffering, as well as the humor in this play.

Oh, no! I've missed the show! It sounds like one of the best, too.